Why thank you so much Nintendo for giving gamers two Halloween worthy downloads to choose from today! Unfortunately neither of them are very good but hey…we sure appreciate the gesture. First up is Castlevania: The Adventure which was originally released for the Game Boy way back in 1989. Simon Belmont’s Grandaddy Christopher leads the charge in this installment as the series takes its first (of many) dips into portable water. Too bad this one whiffs it pretty hard as the end result is horrifying for all the wrong reasons. Aside from an excellent soundtrack, Adventure doesn’t come close to matching the visual or control standards set by its home console cousins. As a curiosity, I’d say this game is worth tossing a couple of bucks at but really what you should be doing is downloading the Rebirth WiiWare remake from a couple of years back. Now THAT is some damn fine Castlevania gaming right there, buddy. 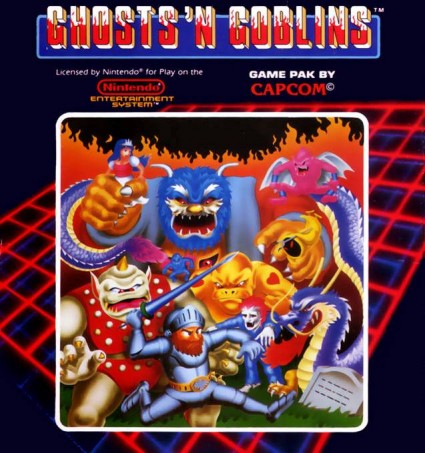 In addition, Capcom has oddly decided to make the NES port of Ghosts ‘n Goblins available to 3DS owners after taking it down from the Wii’s Virtual Console due to a string of related suicides across the country. Still, despite how unholy the difficulty level is in this game I’m thinking of possibly snagging it as I love walking around with perfectly emulated NES games in my pocket. Speaking of which, if you haven’t already I strongly suggest downloading the original Punch-Out!! as it lends itself beautifully to quick-play bursts.

A few other games are also out today including a weird ass looking original eShop shooter designed by Suda51 (Killer 7, No More Heroes) called Liberation Maiden:

I’d never heard of this before but it’s been out in Europe for a while and word is that it’s solid but also a bit short and repetitive. Go ahead and [click right here to check out the full list of today’s games courtesy of Nintendo.](http://ebm.cheetahmail.com/c/tag/hBQibZjB8dqCYB8uutAAABylLRB/doc.html?t_params=I_REPORTING_AGE%3D4%26EMAIL%3Dsnapshotpioneer%2540gmail.com%26GENDER%3DM&om_rid=AABylL&om_mid=_BQibZjB8uutAQO)