In the northwest corner of Nunavut, Canada, a formerly inaccessible bay off of the Arctic Ocean has become reachable through a secret inlet. Untouched by the hands of time and fed by both the ocean and warm fresh water springs, Ridback Bay is teeming with sea life. A remote, timeless bayside village is now being inundated by entrepreneurs awaiting the influx of the world’s greatest fishermen to harvest this plentiful bounty. The docks and warehouses are being revitalized, and now it is time to begin the real adventure.

Thus begins the story of Fleet, a card/auction game designed by Ben Pinchback and Matt Riddle, and published by Gryphon Games. Successfully funded by Kickstarter in April, and shipped (ha) in September, Fleet pits 2 to 4 players battling to out-fish their opponent’s fleet of commercial fishing boats. Whoever catches the most victory points at the game’s end is clearly the most distinguished and established fleet owner, but earning that title won’t be easy.

The goal of Fleet is to gain fishing licenses, launch boats, hire captains, and fish the briny sea. The real goal of Fleet is to manage the hell out of your resources. Each player starts with the same hand of cards, which is one of each type of boat: Cod, Shrimp, Tuna, Lobster, Processing Vessel, and King Crab.

Speaking of phases for each turn, here’s a quick rundown:

Once the phases are complete, the current player marker (a little wooden tugboat) moves to the next player, and a new turn begins with a new auction. It should be stressed that the above rundown is the bare basics of each phase, and doesn’t take into account the license bonuses, which are a huge factor in the gameplay. 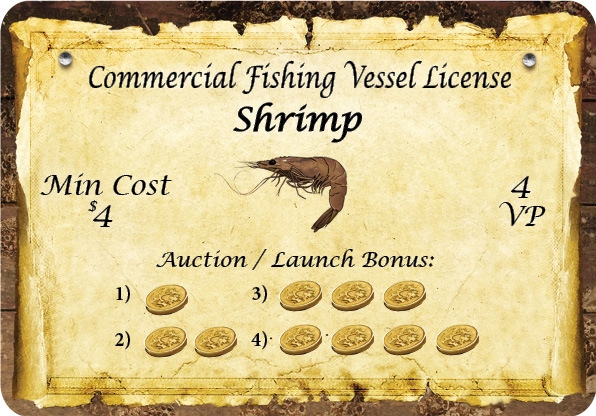 As seen with the Processing Vessel License above, Each license comes with a bonus, and each bonus distinctly affects one or more of the game’s phases. If you own a Cod License, for example, you’re allowed to launch two boats instead of one during the launch phase (if you have the cash and cards to do so). On top of that, if you launch any boats during that phase, the Cod License lets you draw a card for launching boats. The Lobster License works much the same way, but with hiring captains. Then there’s the “premium” license cards: the King Crab Licenses and the Fisherman’s Pub; they cost a pretty penny ($10 minimum during the auction phase), but they guarantee extra VP at the end of the game.

Needless to say, the licenses are a BIG deal. They, and their bonuses, are what drives the engine of your fleet, and why the Auction phase can go from civil to you-son-of-a-bitch in a heartbeat. Because not only do the license cards have bonuses, but if you wrangle more than one of the same license, those bonuses stack. So if you can corner the market and own all four Cod Licenses, you’ll get to draw four cards every time you launch a boat. If you have a Shrimp License, you get an extra buck for every transaction that involves money. If you own two Shrimp Licenses, you have TWO extra bucks for every transaction that involves money. If you own three Shrimp Licenses, then your opponents did not do a good job outbidding you on Shrimp Licenses during the auction phase.

[![Example of game in progress](/images/fleet_example.jpg?resize=300%2C201 "We're going to need a bigger table.")](/images/fleet_example.jpg)Example of a 4 player game in progress.
The auction and licenses do a very good job of setting up the two sides of this game. There’s the social side, where you’re competing against the other players–racing to out-fish and out-bid them. And then there’s the internal side, where you’re yelling at yourself about which cards you should use for certain phases, and yelling at yourself about how you don’t have enough cards. Because the boat cards are used for *everything*, you have to make some very tough decisions on what card to use for what, and these choices add a great level of strategy to the game. Obviously you don’t want to use a Cod card to pay for a Cod License, because then you won’t have a Cod boat to launch, but then when it comes to captaining that Cod boat, which card do you think you can part with? The licenses also set up combos for you to discover as you play. A Shrimp License combined with a Processing Vessel License is a good way to get plenty of cash for auctions, but what good is Processed Shrimp money if you don’t have cards to use when it comes to launching boats and hiring captains? So maybe you try combining a Cod License with a Tuna License to get some extra cards each turn. Of course, your opponents are attempting to pull off their own strategies, so be prepared to fight for those licenses come auction time.

The game ends when all the fish have been claimed, or there aren’t enough licenses to auction for the amount of people playing. Add the VP from your boats, fish, licenses, and premium licenses, and the player with the highest score wins. Games last about 45 minutes on average, and in my experience this is a blessing and a curse. On the plus side, the game’s length adds to Fleet’s replayability when you can play multiple games in one sitting to try new strategies, but the downside is just as you think things are coming together you realize there’s only so many fish left, and the game will be over soon. The plus side to that? You can play again and try to play better.

Thanks to plenty of Kickstarter backers, the cards are a great quality, and the oversized License cards really add to their importance (and ease of reading). The art all around is fantastic, and even the little things like the tugboat “current player” marker, and a turn phase/symbol legend card for each player make this a quality game.

Again the art deserves mentioning. Eric J. Carter has worked on various Dominion expansions and other games, and in Fleet he really nailed what’s going on with the “story” of the game. The wooden cubes are just that: blue wooden cubes, but they represent the “crates” of fish well enough. You won’t exactly feel like you’re in an episode of Deadliest Catch*, but the theme certainly leans more towards that vibe than not.*

The game is fairly simple, and the rules are easy to follow (an example exists for each license card and how their bonuses work, which is nice), but there’s still a bit of a learning curve on how the game plays. More than once I was asked if the license bonus affects all boats or just the boat for that license (the answer is all boats). The Turn Phase/Symbol Legend cards for each player definitely helps, but new players may get confused on how related (or not related) boats are to licenses, or when and how they can do certain things. Remembering to activate the license bonuses may take some initial effort, but after a few games the rules and game phases become second nature.

Everyone I’ve introduced Fleet to has enjoyed it and wanted to play again. With only two decks of cards, it’s a quick and easy game to set up, and since games usually last under an hour, the chances are high that someone will want a rematch before you leave the table.

Having your boat cards act as everything from boats to cash to captains works great within the mechanics of Fleet. It feels like there was this good game, then all the fat was trimmed to make a better game. I’ve played 2, 3, and 4 player games, and it’s a testament to the game’s mechanics that the gameplay is as tight with 2 players as it is with 4. Managing your hand and which cards you should play adds a level of strategy not seen at first glimpse (which also adds to the replayability). The different license bonuses affecting different phases of the game becomes a gateway to discovering different combos which, when successful, can feel very rewarding.

Fleet is almost two games in one. With the auction taking place in the first phase you get a social game with a semi-competitive bidding war between the players, and with the following phases you get a strategic, almost puzzle-like game where every move counts. The melding of the two makes for some fun, challenging gameplay that does a good job getting its hooks into you. I swear that pun wasn’t intended when I started that sentence.

Fleet can be an unforgiving game where if you dig yourself into a hole you can’t get out of, you will feel those consequences almost immediately. A badly played game of Fleet can feel pretty grim. Of course, the upside to that is Fleet can be a pleasantly rewarding game when you’re on your game. I was surprised by the amount of strategy and depth packed into just two decks of cards, and I can easily see my friends and I returning to fish the depths of Ridback Bay time and again.

Kickstarter backers got some extra cards that are available, or soon will be. Salty Captain cards can be bought during the hire captains phase, and allow boats to catch up to 8 fish instead of 4. Inuit Fisherman cards can be purchased during the launch boats phase, and act as 0 VP boats that can catch fish without a captain. Finally, you can add some premium license cards (Nunavut Weather Authority & Wharfside Casino) to the mix that affect gameplay based on the roll of a wooden die.