To be honest, I’ve had a tough time wrapping my head around the selections made for Nintendo’s now seemingly abandoned 3D classics line. In the year and a half since the 3DS debuted, a measly six titles have been retrofitted to show off the system’s fancypants function. The last of which was Kid Icarus and released way back in April around the time Uprising came out. Outside of this NES semi-classic, the rest of the games that have been tricked out is one serious motley crew. There’s Xevious (eh), Excitebike (not bad), Kirby’s Adventure (sure, why not), Urban Champion (the HELL!?) and today’s topic of discussion: TwinBee. A game that I’d never heard of before and with a title like that easily dismissed as complete shit. Well, I’m glad I finally became bored enough to give the little bugger a chance because this game scratches one serious itch for overhead shooters on this portable. 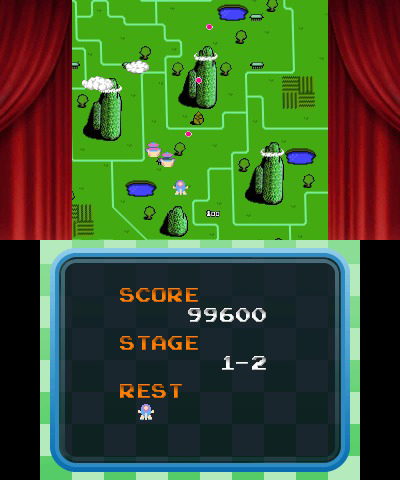 The reason I’d never heard of this thing is probably because it was never released in America in its original incarnation back during the Famicom/NES days. Well, “original” probably isn’t the right word since it was an adaptation of an arcade game but you know what I mean smartass. Also, yes I’m well aware that it appeared in some Konami arcade compilation for the DS under the name RainbowBell. However, given such a reasonably low profile over the past two decades, this 3D classics version stands out amongst its peers thanks to the novelty of allowing a lot of gamers the experience of playing it for the first time and with an added impressive optional 3D no less. In this top down shooter, you’ll pilot a craft that can fire against not only predictable oncoming enemies of the genre: Steak knives, forks, cupcakes, toilet lids dinner plates and whatnot, but you’ll also drop bomb onto these weird pinecone things attacking you from the ground (?). There’s an interesting powerup mechanic at play as well where you shoot clouds to reveal bells. Once these are on screen, blasting them repeatedly allows one to negotiate what weapon you’ll charge your ship up with. It’s a pretty nifty system and I like it a lot even if I haven’t totally figured it out yet. Here, have a look at a trailer courtesy of the internet:

I know it looks extremely simple and it really is but still a worthy addition to any 3DS library if I may say so. As someone whose younger years were spent throwing quarters at games like *Galaga*, this is a nice throwback to a particular era that I’ll always have a fondness for. It doesn’t hurt that the enemies are sort of batshit insane choices and that again, the 3D effect is truly something to behold. In the end, my opinion on these video game matters is all well and good and everything but let’s cut right to the heart here and ask a higher authority what he thinks of this game.

“Hey Mr. Face, you’ve played TwinBee before. In your opinion how does it stack up?”

TwinBee can be bought from Club Nintendo for 150 coins or the good old fashioned way at 4.99 on the 3DS eShop. The choice is yours.