The Super Star Wars series of children’s video games for the SNES are just 3 of many countless reasons why I was never destined to become a world class athlete. In this 16-bit sidescrolling arcade action platforming series, players are given the chance to pick their favorite characters from George Lucas’ imagination and run through that galaxy far, far away recreating scenes that for the most part never even happened in any of the movies. Featuring detailed animation, incredibly authentic sound effects/music, fancy mode-7 graphics and a challenge level that could turn a 12 year old kid bald, these games were very popular in their time. I’ve been meaning to go back and review them for a while but now that the holidays are over with and I just survived the flu, I guess I’ve run out of excuses to keep putting it off. Ah, well let’s get this over with. 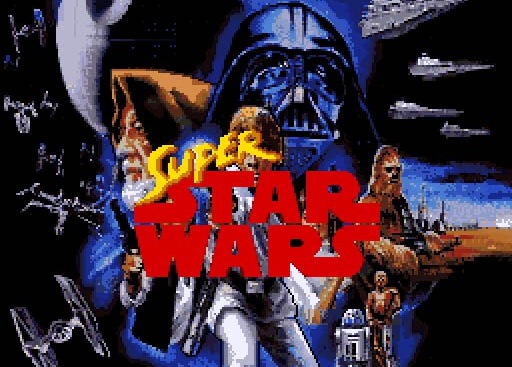 So Super Star Wars was released during that terrible “between” era, some ten years after Return of the Jedi and still well before the special editions, let alone prequel trilogy. This sad chapter in our culture’s history is more commonly referred to as “the dark times” amongst certain nerd circles that I just made up for this article. In those days us Star Wars fanatics could take this universe any way we could get it even if that meant collecting crappy Dark Horse comic books, hunting down toys from the Power of the Force line of bulked up action figures, or even just re-buying the VHS tapes for the 7th or 8th time. So it was a day long remembered when the Super Nintendo became the exclusive home to a series of tricked out video game adaptations. Hey, this review is writing itself! Right off the bat, this game impresses with an adorably pixelated attempt at recreating the opening scroll from the films.

There’s even a debug code you can enter that allows you to speed up the text or spin it around or any other kind of wacky idea you may have. I can’t remember exactly what it is right now but I think it involves a second controller. Hope that helps. So once you gain control of Luke’s blonde locks, you’re immediately running and gunning through Tattooine: making Wamprats, scorpions and what look like those pesky Mynocks that munch on the Falcon’s power cables in *Empire* wish they’d never been designed by Ralph McQuarrie. The controls are nice if not a little stiff, you can’t run and shoot at the same time in this first game and the constant stop/start feeling can be slightly annoying. You have your standard jump as well as a somersault which can be performed by pressing up and either left or right when you decide to leap. There’s a kneel function as well as a slide move that doesn’t actually do any damage unless looking cool hurts stormtrooper’s feelings. These moves are the same for all three characters that you’ll control throughout this game so I certainly hope you’re paying attention. 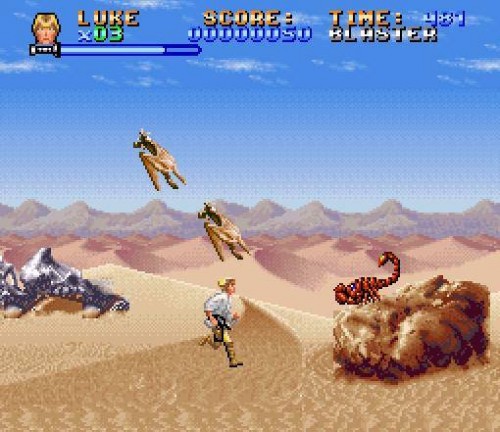 After running around a bit you’ll come across the first boss not only of this stage but also the entire trilogy. Can you guess who it is? If you named Sarlaac, the sand monster from Return of the Jedi then congratulations: It may be time to consider practicing street magic. What this creature is doing as the first major enemy in this game is anyone’s guess but he’s a blow through and you’ll quickly find yourself staring at a cut scene detailing the next step in this adventure. Hopping into your landspeeder with a certain protocol droid, it’s time to scream through the desert via the magic of Mode-7 to seek out the Jawas’ sandcrawler.

You’ll bullseye plenty of the little bastards along the way too and once you reach your destination, it’s back to some sidescrolling action as Luke fights up the side, into and through their massive transport in an attempt to rescue R2-D2 from the clutches of some weird fire demon thing (He’s the first of many, many made up bosses to be encountered throughout this series). From this point on if you’ve seen any of the movies you can pretty much predict what’s going to happen next. In fact outside of some fairly odd choices here and there, the Super Star Wars games do a solid job following the general beats of their live action counterparts. You rush through some more stages on Tatooine, murdering countless members of the peaceful Tusken raider tribe trying to find old Ben Kenobi, and once you do he’s just sort of standing there. Shooting the breeze, I guess. Who knows what 20 years alone in the desert can do to a man’s mind. Anyway, he of course rewards you with your very own lightsaber courtesy of Darth Vader your dead Dad and now that you’re armed with this weapon you can toggle between it and the blaster. It’s not a bad choice to have when spinning from platform to platform as it creates a sort of shield around you but in general it isn’t the most practical offense throughout the game. Still, it’s a lightsaber and you’re going to want to run around listening to that sweet hum. So it’s not long before you find you and your motley crew of a couple of droids and a crazy old wizard in a bar full of grouchy aliens. You’re able to select either Chewbacca or Han at this point with the former being the way to go (he has a longer life bar). At the end of a very long and difficult fight through the Cantina you come across this handsome devil: 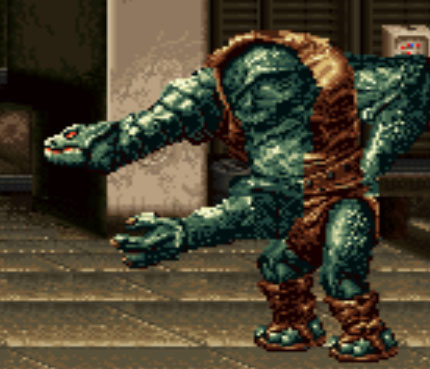 Who at first may seem unfamiliar but eagle eye nerds will recognize him as one of the character pieces being used in that weird “chess” game on the Falcon (You can go ahead and deposit that street cred in my account whenever’s convenient). This guy is hard and by that I mean he just takes about a billion years to finish. Even on the recommended easy setting you’re gonna have a tough time making it past this hombre’ with a fully powered up blaster. Wait, did I forgot to mention the various guns at your disposal? There are five different types of blasts total and outside of the default little piece of shit laser gun, they all have certain strengths and you’ll quickly find a favorite.

– Laser Blaster: You might as well just use harsh language.

– Flame blaster: Not bad in a pinch but we can do better.

– Proton Seeker: This gun is pretty good and I can see it being someone’s favorite but I prefer…

– Rapid ion gun: This beautiful pulse-style weapon has a very satisfying “feel” to it and the accompanying sound effect is quite pleasant.

– Plasma Wave Blaster: The strongest weapon in the game and certainly appealing in its own right.

The weapon system in general however is a little annoying in these games: Once you upgrade, that’s it. There’s no toggling between what you’ve collected and if you want to keep the gun that you’re using then you have be sure to avoid running over any upgrades. Not the worst thing in the world of course, but even just being able to cycle through 2 ala’ Contra III would have been nice. 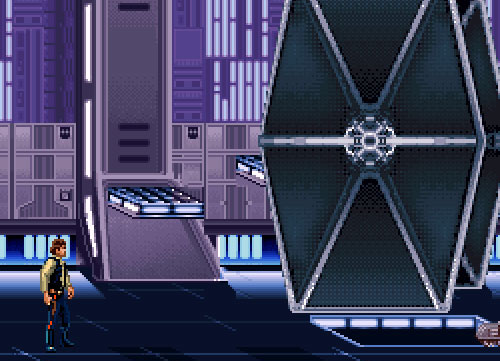 Back in the game it’s…you guessed it: Time to spring the princess from her cell onboard the Death Star. Unfortunately, the programmers didn’t decide to go the whole nine yards and make Luke and Han little Stormtrooper costumes but I digress. These stages are neat and offer up a much needed change of color after all that hagsville brown and orange on Tatooine. On the level pictured above, Han is making his way through a hangar taking out troopers and droids as the occasional TIE fighter whizzes past his head. It’s pretty great, in fact this whole area makes me think of the Ninja Turtles for reasons I can’t quite put my finger on. I guess the technodrome is sort of Death Star-ish but that’s not it. If any of you have any ideas, let me know. Anyway, these stages are all pretty straightforward, all hopping and blasting until you reach the cut scene that shows Obi-Wan get his and the Falcon take off with the princess in tow. 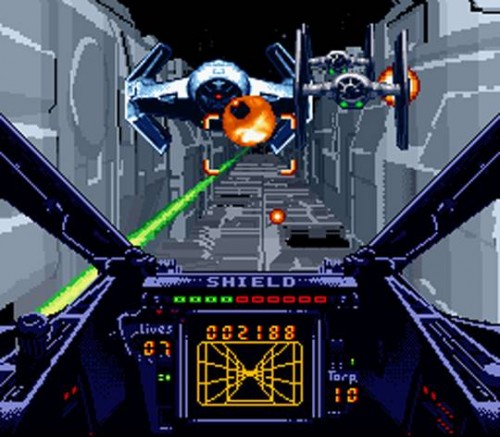 And once her sweet little ass is secure it’s time to show the Empire what’s what by sticking a pin in their little planet popper. Hopping back into Mode-7 mode, players pilot the X-Wing across the surface of the Death Star before the gameplay switches it up yet again to a very neat cockpit view. Screaming through the trenches amidst oncoming Tie fighters with Johnny Williams earning his paycheck in the background, this is one of those moments that truly shines as a great Star Wars experience. And once you finally blow that thing and come home to your hero’s reward this game has revealed itself to be flawed for sure, but still a lot of fun. Solid controls, great visuals, impeccable sound and some nice variety in the gameplay department is pretty much all I ask of any game and Super Star Wars absolutely delivered when it was released and still holds up as a fun adaptation.

But wait! it’s about to get so much better…

Super Star Wars can be conjured up through your Nintendo Wii via the Virtual Console by sacrificing 800 points to the demon lord beelzebub.