Published in 2004, Gloom is your basic casual card game where you play cards to give yourself points, or play cards to make your opponents lose points. There is a delightful twist to Gloom, however. Each player overlooks five characters from four eccentric families, and using an Edward Gorey-meets-Addams Family theme players spend their turns weaving tales of woe and playing cards to make their family as miserable as possible and killing them off when they’re at their lowest of low.

There are four card types in Gloom. Players are dealt five cards each, and whoever had the worst day goes first. Here are the cards you’ll play: 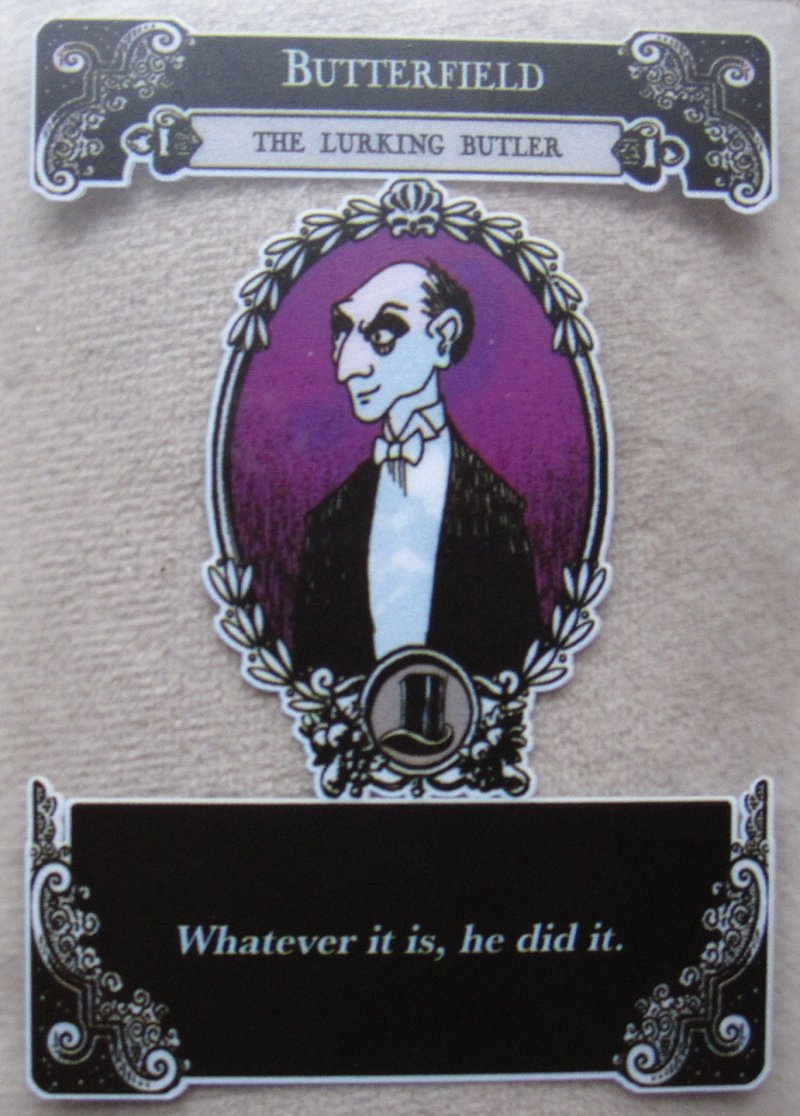 As mentioned above, these are the 5 cards you place in front of you during the game’s setup to represent the family you’re playing for (or against, depending how you look at it). From the Frankensteinesque mad scientists of Castle Slothgar to the circus freaks from the Den of Deformity, each family and its members has a unique theme that adds to the overall theme and storytelling of Gloom.

Modifier cards make up the majority of the Gloom deck. These are the cards you play to make your family miserable, or your opponent’s family less miserable. One of the game’s defining mechanics is that its cards are transparent, so when you play cards, you’re placing them on top of previously played cards. This can either cover up a card’s previous points/effects, or introduce completely new points/effects while keeping the status of some of the cards underneath. 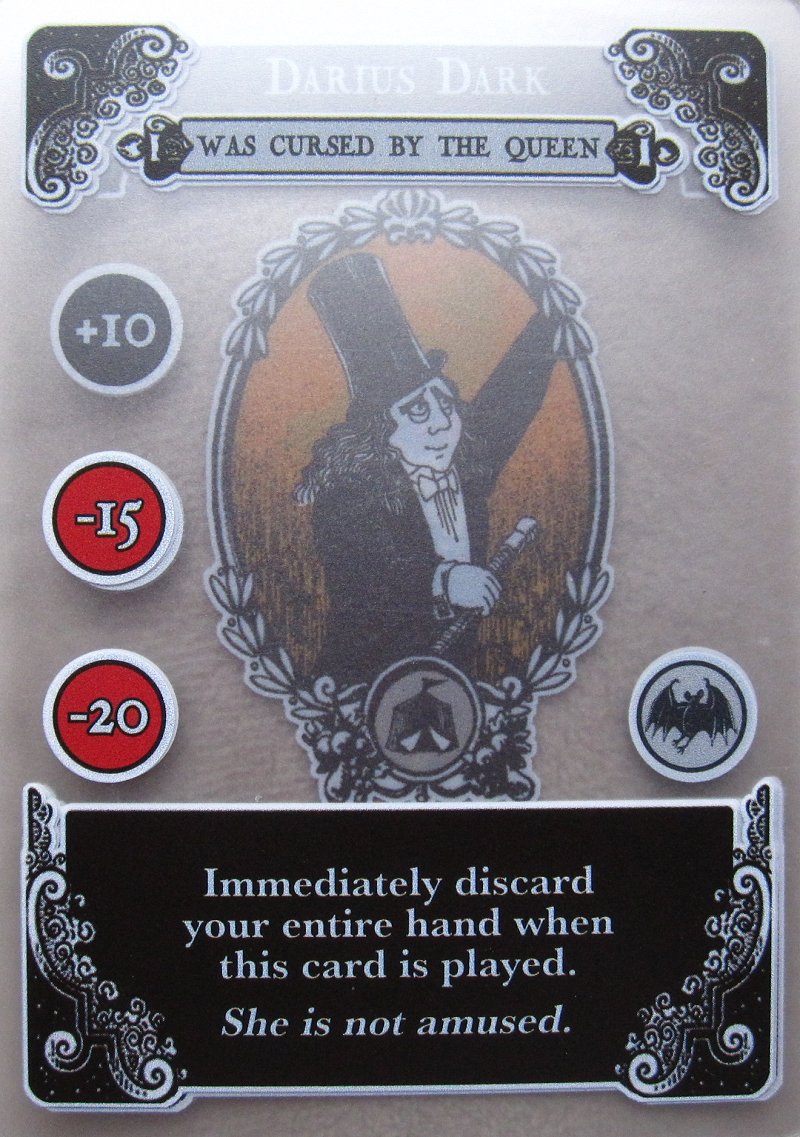 For example, Modifier cards have what are called Pathos Points which determine the misery (or happiness) of the family member on which they’re played. Along the left side of the Modifier cards are three spots for Pathos Points to appear (the top slot is more common while the bottom slot is more rare). So let’s say you play the “Was Tortured By Toddlers” card on Cousin Mordecai, which has -20 Pathos Points in the top slot. Congratulations, you’ve made Mordecai pretty unhappy because of that! Then later on you play the “Was Vexxed By Vampires” card on Cousin Mordecai which has -10 pathos points in the bottom slot. Because the cards are transparent, that -20 from the first card underneath is still showing through, so now Cousin Mordecai has -30 points and is really unhappy. Super!

Once you play an Untimely Death card on a family member, turn that character’s card over to display its grim skull through the stack of transparent cards played on top. That character is now dead and its Pathos Points are locked in place until the end of the game (or until an Event card shakes things up). The first player to kill off his or her entire family ends the game, and scores are based only on the points from dead family members. 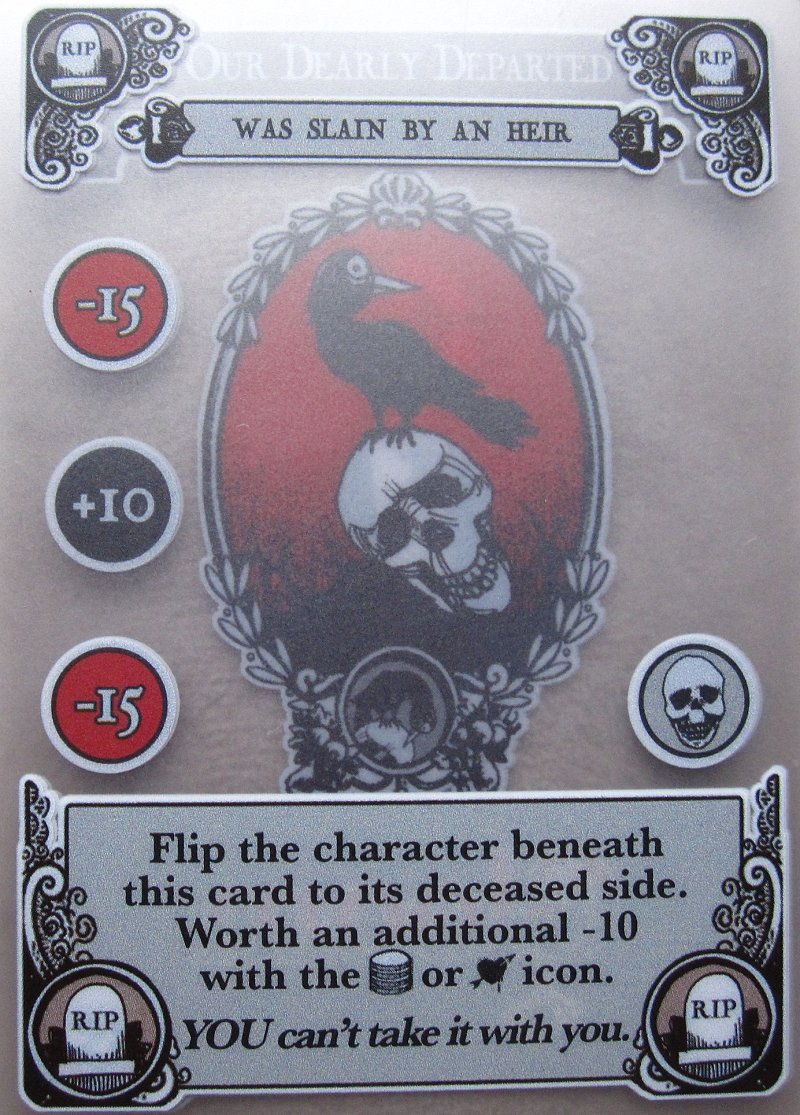 For each turn, you’re allowed to play up to two cards from your hand (or discard up to two cards from your hand), but Untimely Death cards must be played as your first card. This is to prevent players from dropping -20 Pathos Points on a character as their first card and then killing them off with their second card. This little rule adds a nice bit of strategy; do you press your luck and try to make James DeWinter more unhappy this turn and kill him off on the next turn, or pull the trigger this turn? Because if you wait, it’s entirely possible one of your opponents could play a “happy” Modifier Card like “Was Knighted By Nincompoops” to give James +20 Pathos Points and make him a bit more happy.

Event cards are single-use cards that can be played and discarded for their immediate special effect. Some Event cards can move Modifier cards from one character to another, bring family members back from the dead, or even be used in response to other cards. One other aspect of the Modifier cards above is some will have story icons–the “Found Maggots In The Meat” card has the “Goblet” story icon, for example. These icons add another level of gameplay since some Untimely Death or Event cards can’t be played unless a character has a “Beast” story icon, for example, or perhaps you’ll get bonus points killing a character with a “Marriage” icon.

“Story icon” is an appropriate name for those symbols because while Gloom has a solid set of rules and gameplay, it’s the storytelling that you and your friends come up with that make the game special. Sure you could simply play the “Was Put Into Prison” card on Samson O’Toole for -20 Pathos Points and be done with it, but Gloom begs the player to tell a tale of why Samson was put into prison. Perhaps his tale ties in with a card played earlier on, or perhaps you could make something up on the spot!

This is Gloom’s blessing and curse, as it is with other games along the same vein: it’s as fun as you make it. If you play Gloom with boring people, it’s going to be a boring game. Fortunately the game stands alone on its mechanics and gameplay, so even a boring game of Gloom isn’t as bad as being wounded by wasps, burnt by a mob, or plagued by the pox.

If you imagined situations where and how those unfortunate events above might occur then Gloom may be the game for you.

I read somewhere that the card quality wasn’t great with the first print, but seeing that the game came out in 2004 chances are you won’t be buying the first print. The card quality is great, and the transparent cards work really well in the gameplay. The box is pretty obsolete, especially if you buy an expansion, so you may find rubber-banding the deck a better storage solution.

The artwork and flavor text on the cards work well bringing you into the world of Gloom*. If you have a dark side, you’ll fit right in with the game’s theme. Unfortunately since your family member needs to show through the transparent cards placed on top that means all those Modifier Cards have little to no art on them–the flavor text is nice, but be sure to bring your imagination to the table.*

This is a fairly simple game to learn, as the rules fit on the front/back of a single sheet of paper, but there are still some little things to remember and get used to. The biggest hurdle being almost every card you play has Special Effects that affect you, other players, or gameplay in general. Your hand limit is 5 cards, but that can change multiple times in a game, and it can take some effort to keep track of all the Special Effects currently in play.

Gloom has high replay value. There’s plenty of cards in the base set, and depending how wild you get with your storytelling, no two games feel alike. It can also be a fairly quick game depending how soon someone kills their family off (the rules also suggest starting with only 4 family members instead of 5 for an even quicker game), and quick games lend time for more quick games.

The transparent card is such a simple idea, but also such a good idea, and Gloom does a great job utilizing it. The Story Icons work well in connecting cards with one another even if lame storytelling is taking place, but again those special effects feel like they can get out of control at times.

The simple gameplay leads to a simple, casual game where it’s up to the player to fill in the cracks. If you ignore the storytelling in Gloom you’re doing the game a disservice, but luckily the game still holds up if you’re playing with a bunch of lamewads.

Gloom is a fun, casual game that makes a great filler for game night when everyone doesn’t feel like dealing with Euro rules or wooden meeples. Compared to another casual card-only game like Munchkin that can drag and drag as the night goes on, a game of Gloom can feel like a breath of fresh air.

Expansions: Sadly, the general consensus for Gloom expansions is to stay away from them as all they do is introduce new mechanics that muddle the rules and slow down the gameplay. I think Unhappy Homes is safe to add to the base game, as all it introduces is a house card for each family that you can add Mystery Cards (like Modifier Cards, but only for your family’s home) too, and I don’t think it muddles or slows the game down. It also adds another family to increase the players to 5. That’s the only expansion I’ve ventured to buy, so try at your own risk.

There’s also a standalone Cthulu Gloom version, because it seems every casual card game needs a Cthulu version as well.