Burnout 2: Point of Impact was a jaw-droppingly cool high speed arcade-style racing game from 2003 that rewarded players who weren’t afraid to live a little dangerously. It’s the only racer developed by Criterion that yours truly has ever had the pleasure to experience despite the fact that this studio is known for creating a number of critically acclaimed entries in the genre for both the PlayShitPart3 and XBoxWhatever. The reason for this oversight being that up until last month, Burnout 2 was the only one ever made available for a Nintendo console. Which kind of sucks actually because it’s probably in my top ten or so favorite GameCube games of all time. Being a stubborn ass Nintendo loyalist aint all glamor, kids. Luckily however it turns out that good things do indeed come to those who wait because Need For Speed: Most Wanted for Wii U is here. A game that is so unbelievably awesome, I feel like no number of praise worthy paragraphs will do it justice. Which is actually a good thing because we here at Nintendorks don’t really like typing all that much. 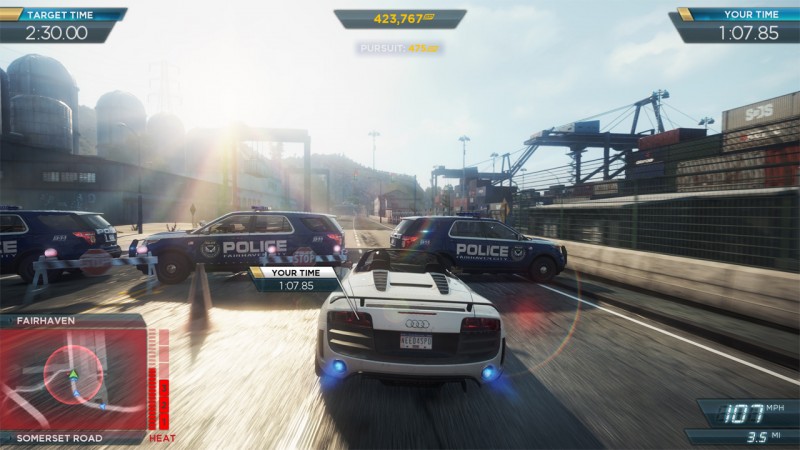 Let’s get the basic stuff out of the way first. Need for Speed: Most Wanted is one of those open world, “sandbox” type deals that allows players to travel between each territory at their leisure. Typical themes are all present and accounted for ranging from a downtown metropolitan area to the industrial outskirts as well as the city’s surrounding mountain and forest freeways. Scattered throughout are the various races one can enter to earn points for part upgrades, new vehicles, yougettheidea. At first and for whatever reason, I was under the impression that each event had to be driven to to access it which sounded like a serious pain in the anoos. But fortunately this isn’t the case as everything can be jumped to via a quick press of the crosspad. A menu pops up offering the option to immediately start any race as well as stuff like switching cars or jumping into multiplayer. WHEW.

Where this game comes into its own however is in the inclusion of a psycho police force that is straight up out to murder you. Tailing and crashing into your vehicle every chance they get not only in the open world but in some of the races as well, these guys will definitely put your knowledge of obscenities to the test. I was really concerned this aspect of the game would be a major turn off and I’d be longing for a more traditional experience in no time but the added result is actually the complete opposite. The threat of the fuzz shutting your ass down at any moment creates an addictive source of tension and immediacy that frankly makes it hard to imagine not being bored by any other racer from now on.

What about the Wii U gamepad you ask? 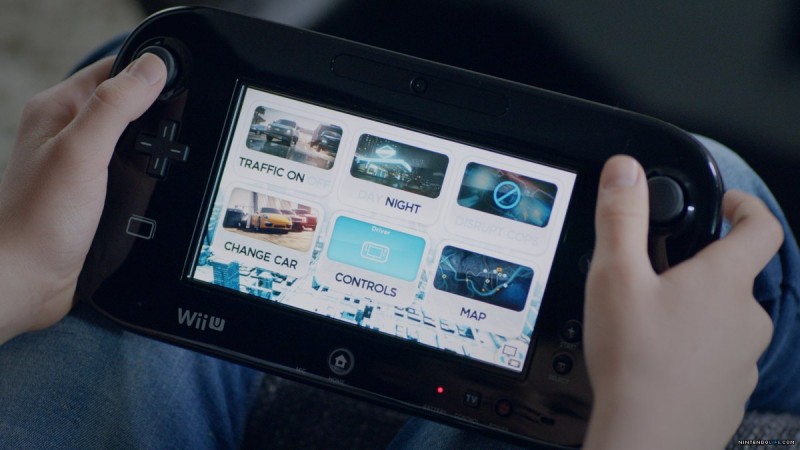 Well, the unique function of Nintendo’s touch screen controller works fine for playing alone but is really mostly a showcase for the exclusive to the system 2 player co-op mode. One person manipulates the car using their choice from all kinds of supported schemes including the Wii Wheel, nunchuk and wii-mote as well as the Wii Classic and Wii U pro controllers. While driving, a second player assumes the role of sort of a back-seat driver really. With a quick tap of the finger you’re allowed to help a buddy evade the cops a bit easier by disrupting them, switch the bot traffic on and off, turn the day into night like that biker from Raising Arizona, and even change the make of their car on the fly. It’s cool but unfortunately not quite as fleshed out of an experience as the trailers and commercials would have you believe. Still, a fine inclusion nonetheless for anyone feeling a little left out. 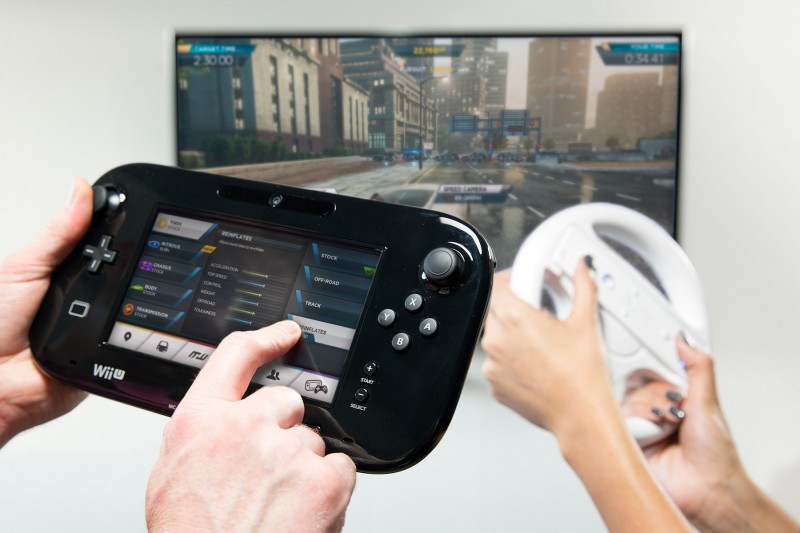 As far as real multiplayer goes, the online system is surprisingly complete. Of course there are the typical race against your friends or the world options but its worth noting that by way of EA’s own origin account thing, you can actually check out your registered pals’ records even if they’re playing the game on either the PS3 or XBox360. Pretty cool. Fancy pants voice chat through the gamepad’s built in microphone is even possible while racing. Welcome to the 21st century Nintendo! One of my favorite elements to connecting with people online are the overworld records that trying to top becomes just as addictive as any of the proper races. Located all throughout the city are streetcams which snap how fast you’re driving once passing them. By itself, its really nothing noteworthy but once you start seeing that real life friends of yours screamed past these marks at 10, 20 or even 50 miles faster than you did, before you know it an hour has passed in countless futile attempts to secure the top spot. Damn you, Gator. 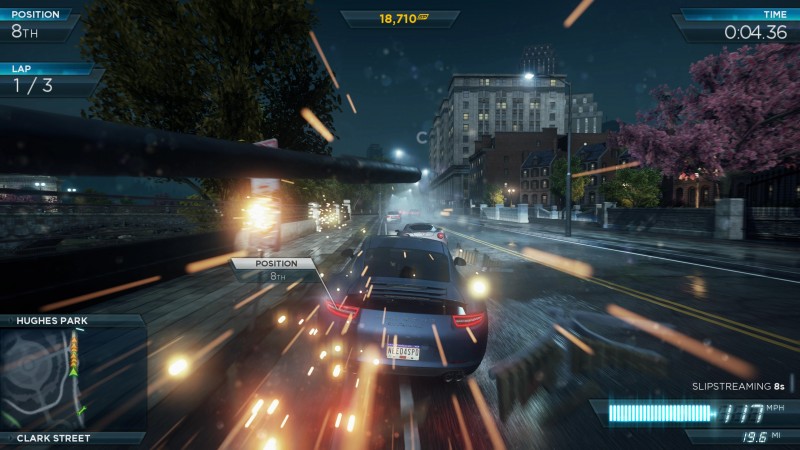 On the visual side of things this game borders on pornographic. Details like beautifully realized lens flares, reflections in puddles on the pavement, tree leaves floating through the breeze and top to bottom incredible texture work all go a long way toward making the otherwise slightly sterile feel of the city feel that much more alive. There’s also a nice day/night system that lends itself incredibly well to the immersion, in particular during the early morning “blue time” hours. I do have a couple of complaints though: You never see any pedestrians walking through the streets or frequenting any of the various shops or restaurants. But I guess I can rationalize this as a good call because I can’t imagine much of a life expectancy for anyone that actually lives in this city. The other thing that kind of gets to me a bit is that the graphics are almost too intricate and beautiful. There are so many tiny little touches that it’s sometimes hard to stay focused on what you’re trying to accomplish because you’re too busy soaking everything up. After a while I discovered that this game hurt the shit out of my eyes because apparently I have a hard time blinking while playing it. But you know what? I don’t care because…

That’s it. There’s nothing more to say: If you own a Wii U, it’s time to give someone some money for this game. And if you already own it for another console or PC, I guess you should buy it again because [according to trusted sources on the internet](http://www.google.com/url?q=http://www.metacritic.com/game/wii-u/need-for-speed-most-wanted-u&sa=U&ei=G0x2UdO-H8LCigKR0oD4BQ&ved=0CBgQFjAA&usg=AFQjCNGxL9_arjfDhPFTzvFXkokrEKkL_A) this is the definitive version.

Oh and of course also because our old friend Mr. Face usually knows what he’s talking about.