The story behind Doug Eckhart’s Tammany Hall is almost as interesting as the story behind Tammany Hall itself; published in 2010 by Stratamax Games, it was an instant hit at gaming conventions, selling all but 80 copies. Once Stratamax sold those remaining copies, Tammany Hall was gone for good (unless you wanted to pay insane prices). Luckily, a fan who managed to snag an original started publishing games through his own company, Pandasaurus Games. He asked Stratamax if he could re-publish the game through Pandasaurus, and to his surprise got the green light. And so the Kickstarter campaign began… 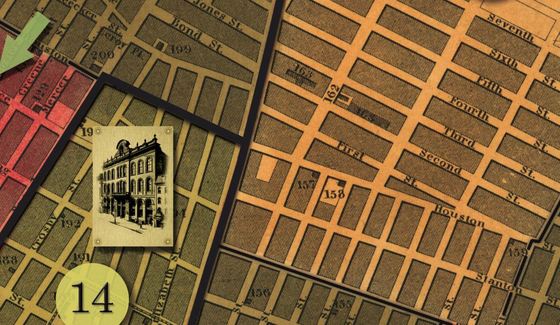 At its core, Tammany Hall is an area-control game for 3 to 5 players à la Risk or the Game of Thrones board game. However, instead of trying to dominate the world you’re trying to take control of New York’s lower Manhattan in the mid-to-late 1800s. It’s a specific setting, which successfully leads to a specific feel. Instead of attacking with armies and knights and raiding parties, you attack with politics, backstabbing, deals made/broken, and any other means it takes to gain control. Your actions per turn are very simple, and as a nice bonus the board itself has references to just about everything you’ll find in the rulebook.

Using the city’s steady stream of incoming German, Irish, British and Italian immigrants, players take turns placing the immigrants and/or ward bosses in one or two of the 15 Wards outlined on the board. Each round of players placing their pieces counts as one year, and after four years (and every four “years” after that) elections are held. Victory points are awarded to players for various accomplishments after an election, with bonus victory points being awarded at the end of the game. After 16 “years” the game ends, and the player with the most points is deemed supreme victor! 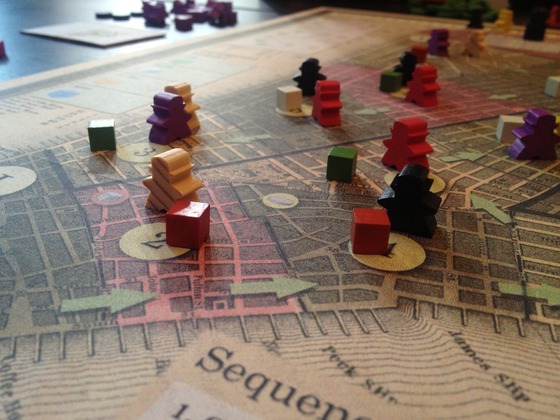 Ward bosses serve a simple function: if you have a boss in a Ward, you have a stake in that Ward’s election. An army of ward bosses won’t do you much good come election time, however. You’ll need the power of the people to sway votes, and that’s where placing immigrants into Wards comes into play. When you place an immigrant cube in a Ward, you’ll receive a round, political favor chip of that nation’s color. When it’s time to vote, those political favor chips also count as votes, so long as the Ward has that nationality in it.

The 15 Wards are divided into three Zones. Starting in Zone I Ward 1, players move Ward to Ward holding elections for all invested players. A player’s total (usable) political favor chips is never a secret, but it is a secret as to how many favor chips they decide to use in a vote. Each player involved in a Ward’s election will announce how many possible total votes they could have, should they spend all their political favor chips (combined with however many ward bosses they have in that Ward). Players secretly put however many chips they want to use in their hand under the table, and then hold their closed fist over the board to show they’re ready to vote. Chips are revealed (win or lose, the chips used in a vote are discarded), and the player with the most votes wins and takes control of that Ward. The immigrants stay in their Ward after an election, but all ward bosses (save one of the victor’s) are removed. Voting then moves to the next Ward. 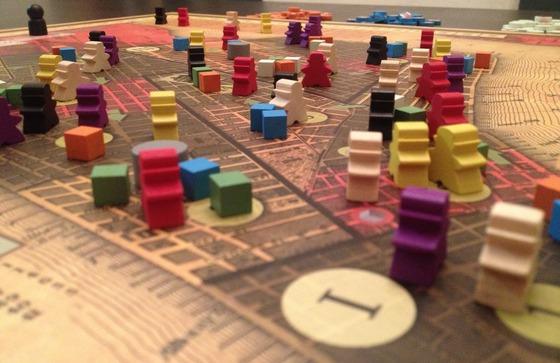 Gameplay revolves around these blind elections, and they lead to some of the biggest moments–it takes some real wheeling-and-dealing to get what you want. It can also lead to some treacherous backstabbing, so make sure you play Tammany Hall with good friends who have thick skin. If you tell someone you won’t vote in this election because you want to use your chips for the upcoming Ward 12 vote (and they believe you), and then you vote with more chips than you let on thus winning that election…well, you’re a bastard, but you’re a bastard with a Ward under your control! Be careful, though; after the first 4-year term, players are able to spend slander chips once per term to remove ward bosses from up to two Wards. In other words, a player you screw over will–in one way or another–have the tools necessary to screw you right back in the near future.

Whoever controls the most Wards after an election becomes Mayor, which is both a blessing and a curse: the Mayor gains bonus victory points and gets to go first for the next 4 rounds, but he or she also has the unfortunate job of appointing the four remaining office positions to the other players–players the Mayor quite possibly just screwed over to become the Mayor.

Each office has a specific power that players can use during their turn, such as the Chief of Police who can arrest (remove) one immigrant cube from the board, or the Deputy Mayor who can claim an extra political favor chip each turn. These offices will often be used for favors during the elections, such as “hey, I’ll let you win Zone 9 if you make me Precinct Chairman when you become Mayor.” 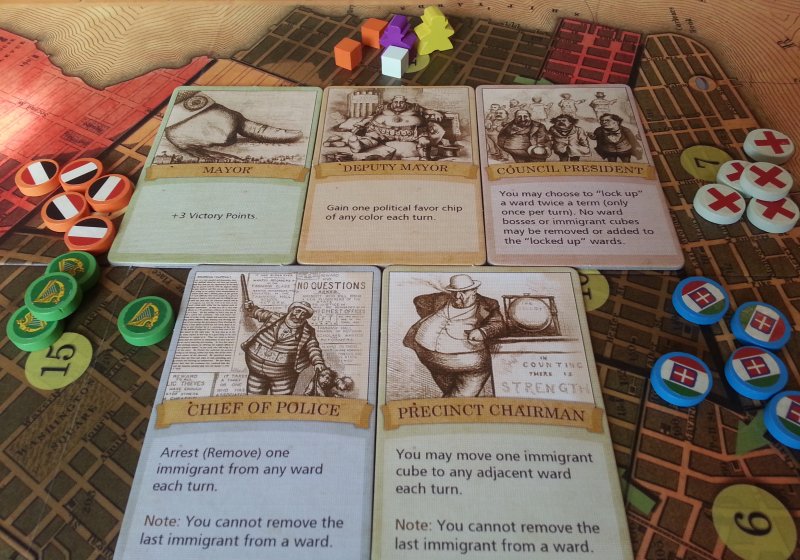 These offices and their “powers” are one of the best aspects of the game as each position brings its own strategy to the game with those strategies used in different ways. The Precinct Chairman, for example, is able to move an immigrant cube from one Ward to an adjacent Ward. You could use this power to build up the population in one of your Wards (a good strategy if the Chief of Police has it out for you), or you could use this power to move an immigrant into a Ward you have no interest in, but in doing so makes the voting for that Ward much more cutthroat for other players (thus weakening those players for votes you do have interest in later down the line).

There’s a couple other aspects to gameplay such as waterfront property giving a minor bonus for winning those elections, and getting bonus political chips and points after an election (and at game’s end), but overall that’s the game: bring immigrants into the country, use them for your political gain, seize power, and try your damnedest to hold on to that power. It’s one of the most strategic games I’ve played with little to no luck, and that combined with the political theme really captures the feeling of dirty politics. Depending on the strategy of the players, games can last from one to three hours.

Thanks to the support of 2,392 Kickstarter backers, Tammany Hall reached a lot of stretch goals and just oozes quality. The components are simple wooden pieces, but little touches like bowler hats for the ward boss meeples and top hats for the big boss score markers really fit with/add to the theme. The board is thick and sturdy with sharp art and colors that make it easy to follow. Little things like the black velvet draw bag for immigrant cubes and the thick office cards to remind each player of their power for that term only add to an already quality game. Hell, this game probably has the highest quality box of all the games I own. Top notch.

The board depicts a historical map of lower Manhattan, which does a nice job of taking you back in time. Throw in the political art on the office cards, bowler hat meeples, and general backstabbing revenge gameplay and you get the closest experience possible to Gangs of New York: The Board Game*.*

There’s the old Othello ad slogan: “A minute to learn, a lifetime to master”, and that fits well for Tammany Hall*. From “Set Up” to “Ending the Game” the rules take up four, easy to follow pages. There’s obviously a little more to it than just placing your pieces and voting in elections, but that’s the basics of the game. It’s a very easy game to learn, but learning the strategies on how to play well is a different story.*

This is a game that will be played over and over in the near and distant future with my friends. Given the intensity and length of the game I imagine one play per night is plenty, but I wouldn’t blame you for wanting to immediately play again to exact revenge and refine strategies.

The only aspect of luck in this game is when it comes time to re-populate the Castle Garden spot with new immigrants–you choose them unseen from the velvet bag. That’s it. Even with that miniscule luck-of-the-draw it’s still possible you can use what’s in front of you for one strategy or another. Everything else that happens in Tammany Hall is your own doing (or your own undoing). This makes the game deeply strategic and deeply rewarding.

Tammany Hall is strategic, fun, exciting, and tense. The strategy can be so deep that the game may drag due to players thinking 4 steps ahead and/or suffering from analysis paralysis…but chances are when someone is taking a long time to decide where to put that one Irish immigrant you’ll be thankful for that extra time to think about what you’ll do on your next turn. I will again give the warning/disclaimer that if you play this game with friends, make sure they understand you’ll still be friends after the game, no matter what happens. I can imagine hotheaded players losing their cool after getting screwed over, but the appearance of law must be upheld, especially when it’s being broken.

They say history repeats itself, and as of April 21st, Pandasaurus has sold out of Tammany Hall. This game is great. Get it while you can.

Images plucked from my phone and Pandasaurus’s Kickstarter updates.