On a site like this one (Nintendorks), chances are me, you, and every other person visiting is a fan of Nintendo. Not just Nintendo, but classic Nintendo and vintage video games in general. In fact, I don’t even own a current generation console, and like Magic Johnson’s dick, I would be afraid of putting a modern video game in my mouth for fear of getting AIDS. However, my heart will forever hold a place for 1980s video games, at least until the dementia destroys so much of my brain that I can only remember the Vietnam War…which I never fought in. Yet, while I welcome companies, big and small, to prey upon my memories of my childhood, I will still cast a discerning eye on any nostalgic molestation. Thus, we turn my eyeballs towards Boss Monster, the newest deck management card game on the market.

Boss Monster touches me, but in a good way. Not just a remake of an existing franchise or a lazy cash grab, Boss Monster takes the flavor of old video games and mixes it with the mechanics of a thoughtful card game in a totally new, original production. This was a Kickstarter project, and considering the gentlemen from Brotherwise Games raised $215,056 of their requested $12,000 goal, the concept clearly appealed to others as well. As an editorial note, one of the men behind Brotherwise Games is Johnny O’Neal, whom some of you may know as a former writer for Nintendorks, and at least one person knows as the mother of her children. This does not change my review, but it is worth disclosing lest I lose my journalism degree from the Eastern Kentucky Online School of Writing and Spittin’.

Imagine every major villain you fought in the video games of yore. Now, picture them getting together to have a contest to see which of them can defeat the most 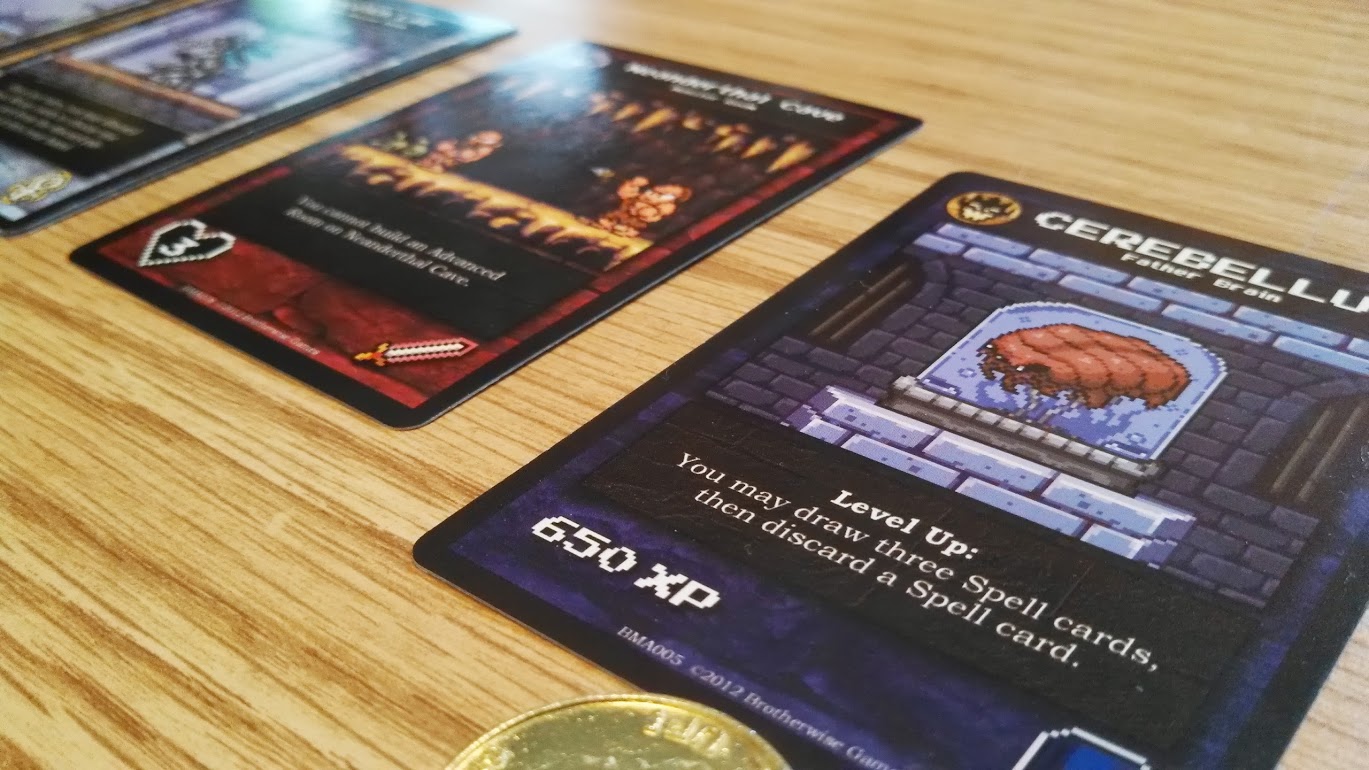 good guys. Now, picture your favorite pet as a child. Now picture the day that pet died. Okay, now let’s come back, and focus on the video game stuff again. In Boss Monster, the best of the nefarious pit their skills against each other to see who can slay the most heroes. To begin, each player chooses a bad guy and collects randomly selected cards to build a dungeon to lure in the fair haired heroes of the world. The dungeon can consist of up to five rooms, either designated as a trap room or a monster room, and once five rooms are built, the special ability of the boss monster becomes active as a one time bonus. Trying to use the bonus more than once will result in temporary blindness and hair loss.

While players are building their dungeons, heroes wander into town in an amount pursuant to the number of players (three players means three heroes come into town per round). Depending on the type of symbols the rooms in every dungeon display, heroes will be attracted. For example, a cleric will be attracted to the dungeon with the most holy symbols. That cleric will then enter the dungeon and work his or her way through each room, taking damage along the way. If the hero reaches the boss monster alive, the player takes a wound; if the hero dies, the boss monster collects a soul. The first to ten souls has all of the bragging rights and 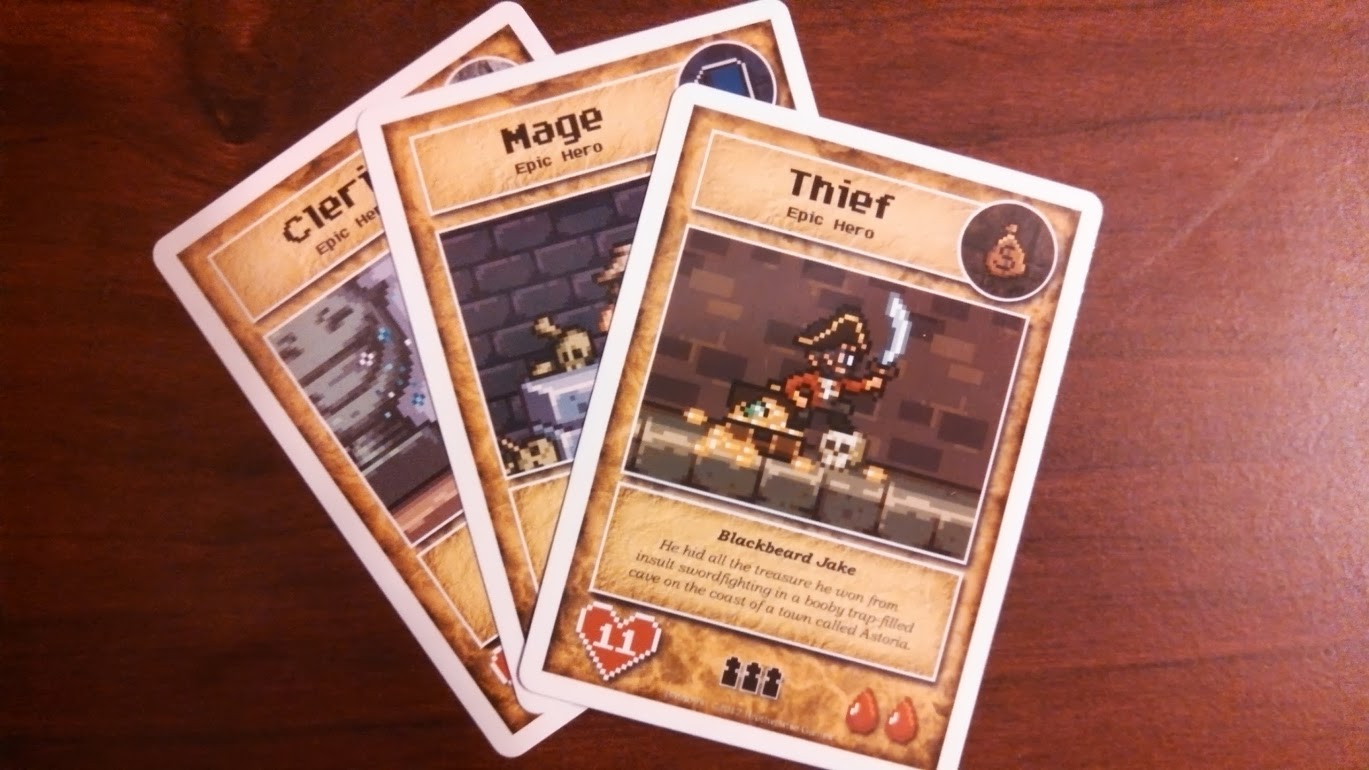 perhaps even droit du seigneur. If players are tied, meaning no one player has more symbols of a certain type than another, the hero remains in town. This can create a major logjam of heroes waiting to enter dungeons. Part of the strategy is not only building a strong dungeon, but determining which types of heroes the player wants to try and bring in. Attract the wrong type too early and it can be curtains for the boss monster! Roll credits.

The game involves a little more skill than just slapping down rooms. Some rooms boost the abilities of others, while some rooms provide an effect if it is destroyed during play. There are also advanced room cards that can be built on top of existing rooms, sort of like a gentrification of monster chambers. Players will also have to increase their rooms’ damage abilities, as the heroes soon become epic heroes with greater health reserves. 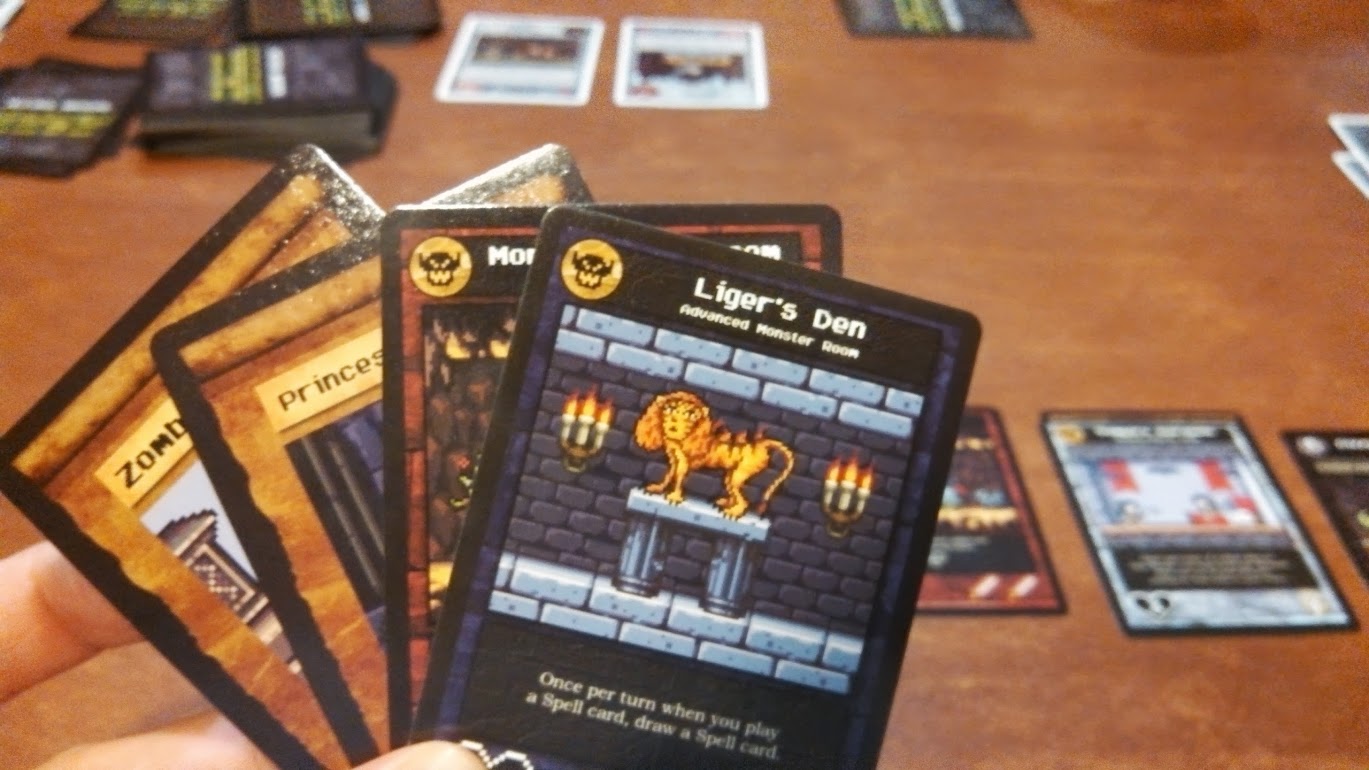 Thankfully, players also have the ability to gain and use spell cards, which can help themselves or hinder their opponents. Spell cards can add extra damage to a player’s room or add extra health to a hero in another player’s dungeon. Lest this sounds too good to be true, spell cards are harder to come by than room cards, in that players start out with five (5) room cards and two (2) spell cards, which they must then pare down to five (5) total cards. Each turn, every player can draw one (1) additional room card but not a spell card. Extra spell cards can only be obtained with special abilities via other spell cards or designated rooms. Spell cards can really make the difference between winning and losing, but players still have to keep their dungeon fluid, so room cards become essential, too. To summarize, cards! Give them to me.

Quality: 5 It is clear a ton of love and work went into making this product. The card stock is wonderful, and the box the cards come in is gorgeous, invoking classic Nintendo cases. Comparing this product to card games from both professional manufacturers and other Kickstarter projects I have played, this is in the upper levels in terms of colors, workmanship, durability, and clarity. Aside from the fact that the cards collect fingerprints like a grizzled police detective, I have nothing negative to say.

Theme: 5 I’ve professed my love for the concept already, but just to recap, if you love card games and you’re over the age of 25, this will strike a primal note inside you. Even if you did not grow up with a Nintendo Entertainment System or similar console, there’s still a lot of fun to be had. The artwork on the cards not only invokes 8-bit memories, but they’re funny and playful as well.

The rules are easy to learn, and everyone I have played with gets the hang of things fairly quickly, becoming veterans by the time the first game ends. I don’t really know anything about children besides they whine and smell bad, but I bet you even 10 year olds could play and enjoy this.

Replayability: 4 What I like about this game is that it doesn’t take 90 minutes to play, and players can get two or three games out of the way over the course of an hour. The game is not really epic, so playing through these cards over and over again could wear out after a while. Still, I have yet to play a game with anyone who did not want to play again.

Mechanics: 4 The basic gameplay executes well, lifting the notion of a side-scrolling dungeon and allowing players to customize their own hall of horrors. There is enough variety in the rooms and enough interplay between the rooms to keep things fresh, but the simplicity can eventually lead to some repetition.

Gameplay: 4 As discussed, games are relatively short, between 20 – 30 minutes, and every player remains involved in the game throughout the course of a contest. In addition to each player drawing a new card every round, every player has the ability to entice whatever heroes wander into town, thus keeping the activity levels varied and fluctuating. Figuring out which rooms to build in terms of damage and which heroes to attract is a constant puzzle, meaning the player who rests early will also lose early.

Overall: 5 I love this game. It is easy to learn, fun to play, and addictive for gamers of all experience levels. The boss monsters are colorful and creative, complimenting the room and spell cards which display the same level of care and craft. As aforementioned, one of the creators of the game has strong ties to our site, but if I did not enjoy something, I would lay it on the table. I may joke around, but I don’t bullshit when it comes to whether a game is worth your hard earned dough. Boss Monster was money well spent. The game is a pleasure to play for experienced gamers and also a wonderful game with which to introduce new people into the world of card games. I don’t know if I’d bring it to a nursing home and play with the elderly, and I would probably not let children who can’t tie their own shoes go near the cards, but Boss Monster is essentially an all ages game that will captivate all who play. I highly recommend this game, and not just because there are a few hero cards who bear a striking resemblance to some handsome Nintendorks staff writers. If you have the chance to play, make it your objective to do so.