It’s probably easy to guess what this game is like for anyone who’s had a go with one of these “New” Marios since the series debuted on the DS 17 years ago. This franchise is reminiscent enough of the plumber brother’s classic titles from the 80’s and 90’s to be a lot of fun, yet still fail to rise above the base template to provide anything truly groundbreaking. To be blunt, the whole affair just feels a bit lazy. Yet they’re still impossible to dismiss entirely because hellooooo? Mario. But with New Super Mario and now Luigi U the most recent releases and effectively the fourth (and a half) installment, the question is how long before this series becomes too derivative to take seriously, especially with the at this point ridiculous New branding? And at a total of $80 bucks to get the complete Wii U New Super Mario/Luigi experience (outside of whichever version of the console you decide to buy) is it actually worth it? The answer as they say dear reader…lies within:

Yourself mostly. Who knows, maybe this article too. 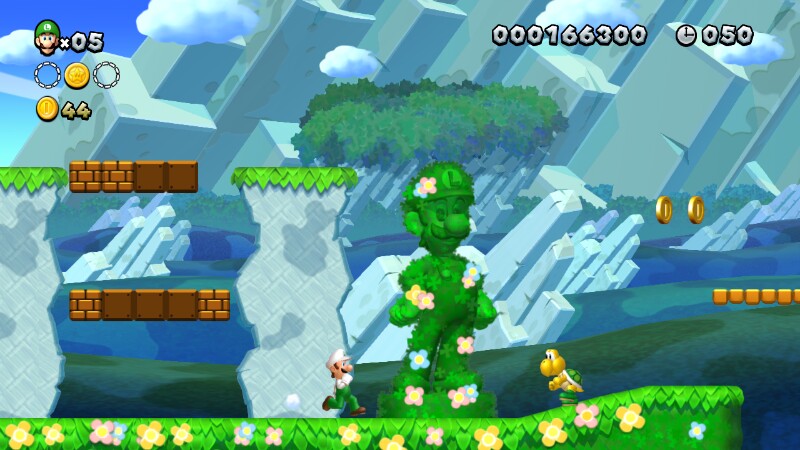 Now I could have sworn I’d written a review for New Super Mario Bros. U back when the Wii U hit 2012’s holiday season but snooping around the old Ndorks archives, it looks like that never actually happened. I must have been thinking of the New Super Mario 2 for 3DS piece I wrote for my other site, a game that came out only a few few months prior. Aye, this “New” branding has become very confusing. My words for that 3DS entry were less than glowing yet that didn’t stop me from putting in enough hours with it to ultimately reach the million coin goal set by Nintendo’s ad campaign. But had I not been commuting so much recently would I really have just sat around long enough to reach that achievement? I’m not so sure. These games are good but not great and now that I think about it, maybe that’s the title they should really be using. 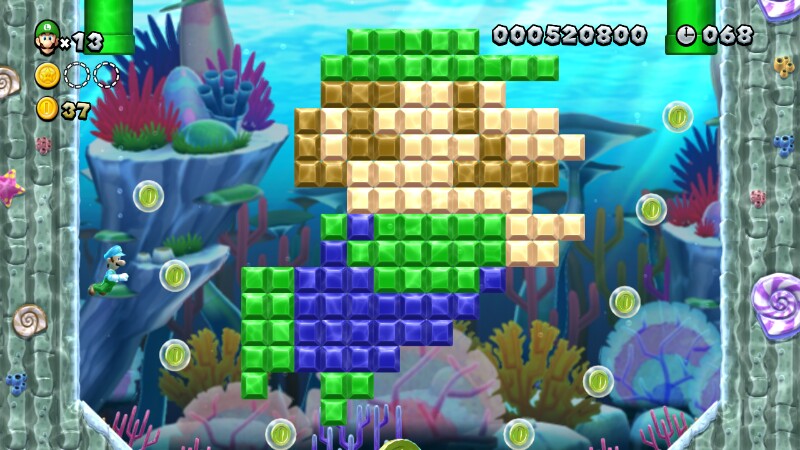 Anyway, it’s Luigi’s year and we’re here to talk about his game so let’s get right down to it. For those of you who are understandably on the fence about purchasing this new sidescrolling adventure, Nintendo makes the choice real easy for you as you can only download Luigi U from the eShop if you already have New Super Mario U installed on your system. This brings us back to that $80 dollar price point I mentioned and to be honest, I really can’t recommend dropping that much cash to play this game alone. There’s a standalone packaged version planned to be released in a few weeks for $30 for those of you with a severe Luigi fetish and that actually sounds about right. You get 82 newly designed platforming stages using recycled character models and spread across the same Mario U overworld. I know, it sounds like this should have just been included as an unlockable extra upon completing Mario’s game and that’s actually how it kind of feels too. But on it’s own merits, Luigi U still rolls out the welcome mat for players seeking a pleasurable and addictive experience from beginning to end. 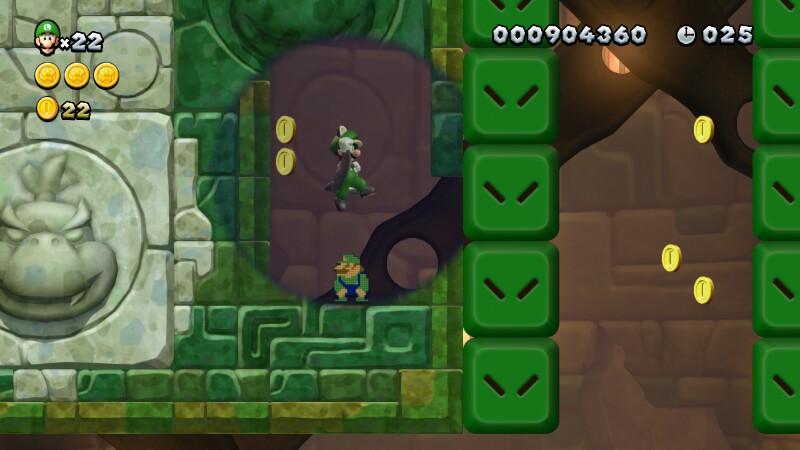 The main differences Luigi U offers up from Mario’s U game is with the core control mechanics and each stage being timed: Luigi has a flutter jump that is much higher than his brother’s and the lanky bastard has absolutely no traction in his boots. Effectively this means each stage feels as though you’re playing on ice. It’s harkening back to his second player handling in The Lost Levels for the SNES (Super Mario Bros. 2 for the Famicom in Japan) and the result is a very challenging and yes, sometimes more satisfying experience. Upon entering the first stage where there would typically be a super mushroom, instead you’re greeted with a 1-up and the chime that signals only one minute left on the clock. Clearly, Nintendo is letting you know right away the sort of challenge level you’re in for. And you know what? The game feels frustratingly hard for the first world or so and then just like that *snap* eventually you find, like any great control scheme affords, a perfect groove and the difficulty begins to melt away. 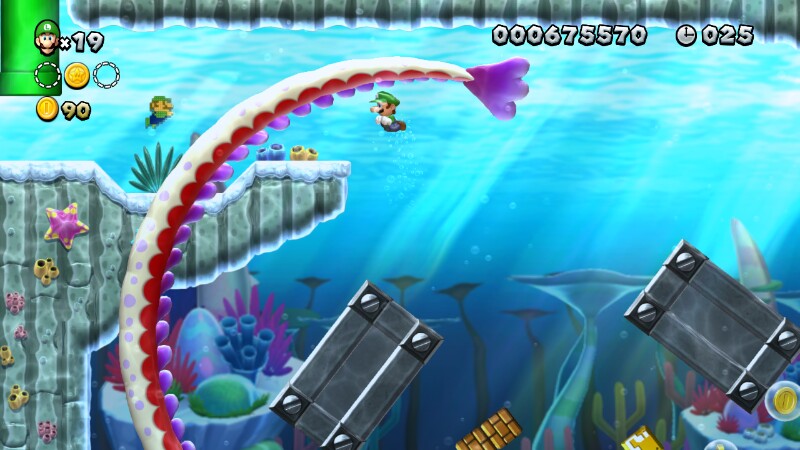 On the audio side, it’s a pleasant affair. Each stage hosts upbeat tunes that are catchy if not particularly memorable. Chalk that up to the fact that we’ve heard most of these themes for four games now and they really weren’t all that hot to begin with. The sounds of this New series mirror every other department as far as presentation goes in that they’re functional and well done and nothing more. One thing I do like however is the dynamic musical shifts when strolling from one world to the next. Some nice arrangements there. Overall though, I can’t imagine anyone stressing over finding a high quality torrent of the soundtrack. 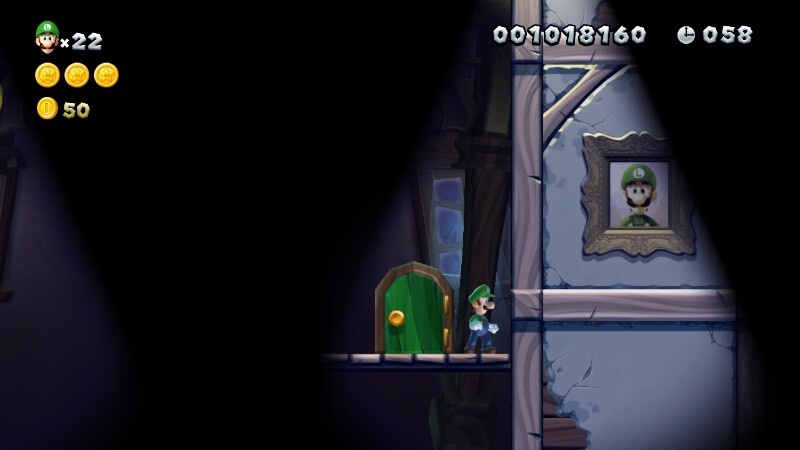 As usual when it comes to the multiplayer aspect, yours truly is sadly uneducated. It would appear that a crippling drinking problem necessitates the lack of any sustainable relationships so I haven’t had the opportunity to check it out. I did get some 2 player action briefly one night which was pretty fun however. I played as Nabbit and discovered that every power up he collects throughout each stage is placed into your overworld stock at the expense of not being able to actually use any of them yourself. It’s a pretty interesting system and I’m curious how it would affect a 4-player scenario. Or five I guess if you count the fact that someone can use the tablet outside of four Wii-Motes/Pro controllers to tap the gamepad screen and create platforms for everyone. 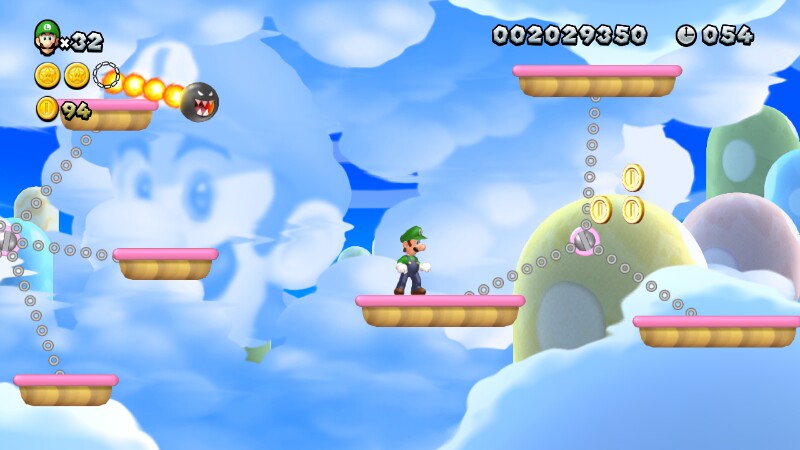 Graphically, there really isn’t much to report. Every installment of every video game placed in Mario’s universe throughout time is typically associated with a bright, primary color palate and New Super Luigi U is no different. I suppose that should be pretty obvious considering it’s straight up using the exact assets from another game. One addition worth mentioning though and is something you can tell from these screenshots is that there are all kinds of little “Luigi” visual Easter eggs scattered throughout. It’s a cute touch if not for the most part a superficial one. Sometimes finding an 8-Bit character sprite can point you in the right direction of a star coin but mostly you’ll just run across stuff like a cloud in the shape of your mustached mug and get this song stuck in your head. 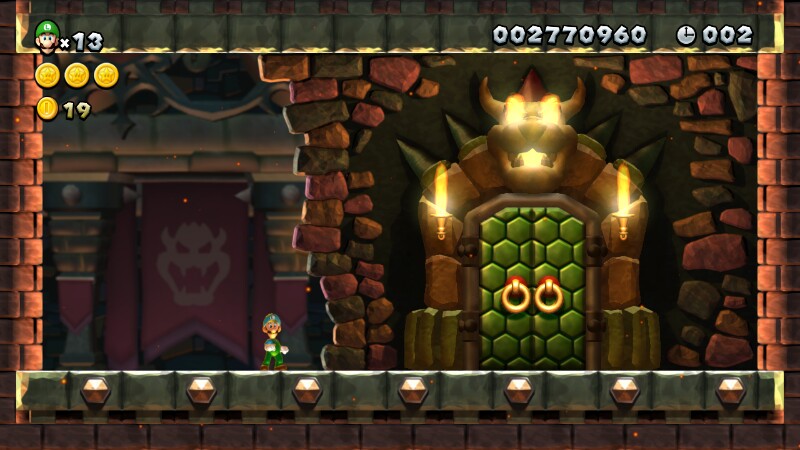 I guess now’s as good time as any to mention that I beat Bowser specifically avoiding the ice world for obvious reasons. Which in the end turned out to be ironic because upon restarting your file after defeating King Koopa, each stage will open with an “M” block allowing you to choose whether you’d like to play using the character physics of the Mario we all know and love. In some weird turn of events, playing these levels with that style in place causes the game to become hard all over again because you’ve already acclimated your responses to Luigi’s style of running around. The mind boggles.

So before Mr.Face weighs in with his ultimate judgement (as he is wont to do), here’s the exceptionally cool Japanese commercial for New Super Luigi U: