I couldn’t help myself. Physical copies of the The Legend of Zelda: Wind Waker HD hit store shelves today but the digital version has been available through the Wii U’s eShop for a couple weeks now. As much as I can appreciate owning an actual disc, there’s no way I ever plan on reselling this and downloading it spared me the “experience” of “engaging” with my “community.” Enjoy your little Ganondorf toy you bastards. So at the stroke of midnight on September 20th, my Wii U welcomed into its tiny little baby hard drive this once highly divisive, now univerally acclaimed installment in the franchise. After 2 weeks of playing it pretty much nonstop, how well does the gameplay hold up? What’s been improved? Does it really look that much better? Is Tingle a convicted pedophile? Well, easy does it because I’m here to address most of that as well as force you to wade through a LOT of pics that I snapped through Miiverse! 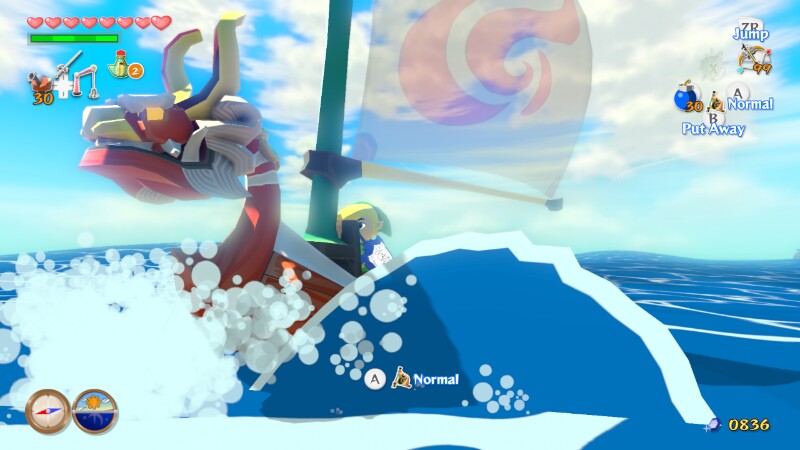 For those of you who’ve been trapped in some guy’s basement for the past decade, Wind Waker has been given an HD visual upgrade from the GameCube original as well as some mild retooling in the pacing department. Remember that godawful hunt for Triforce shards that was notoriously tacked on at the end to pad out the play time? That’s slightly less offensive now! Remember what a royal pain in the chesnos it was to have to stop and alter the wind’s path every time you needed to change direction while sailing? Thanks to the newly added swift sail, that’s gone. Do you hate when people ask a question right before answering it themselves? Me too. 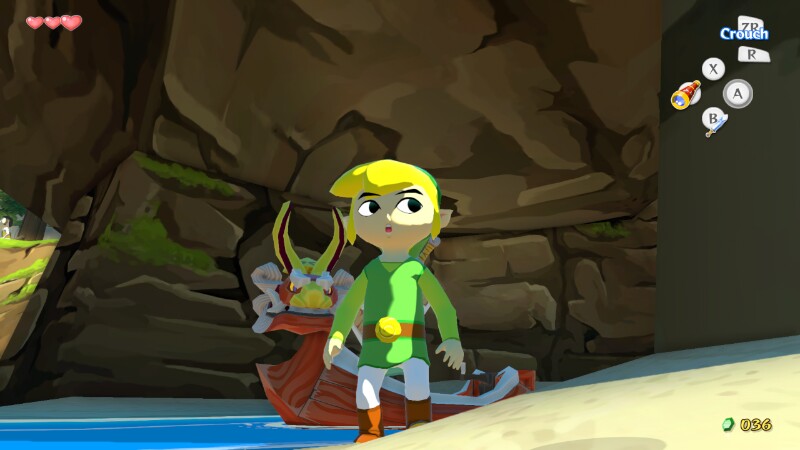 Now when the original hit the GC I have to admit to being a bit disappointed. In a revisit that I posted on Shigeru’s List a couple years back (which I will not link to because whooo, boy it is terribly written), the basic problems that I had were as follows:

– The Incessant Use of the Baton

– An Odd Sense of Emptiness in the Overworld

I still stand by exactly 50% of those issues as the first two were deemed worthy enough for Nintendo to “fix” in this re-release but as far as that second half goes, what can I say? Clearly I can be a big idiot. Wind Waker is a game that has revealed itself to be far ahead of its time; filled with a simplistic depth and emotional charm that few (if any) contemporary pieces of software can even dream of matching. 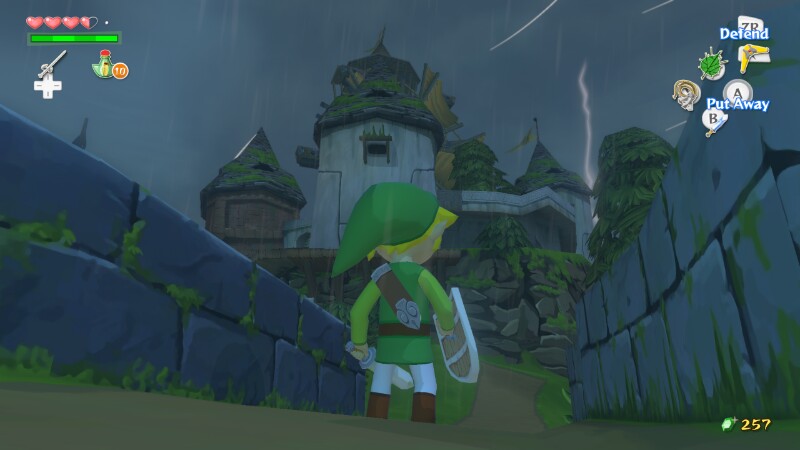 The best news is that everything great about this game remains untampered with. Most notably the combat system which to this day is still by far the most satisfying of the entire series. (I’m looking at you, Skyward Sword). Fighting is so seamless and intuitive that you’ll regularly find yourself completely immersed, seemingly a spectator at the beautiful choreography of your own movements. And those little chimes every time your swing makes contact with an enemy? MAN, do they provide a deep sensual massage to the pleasure part of your brain. The overall control in this game is absolutely impeccable, especially that camera. Is this the best controllable camera in a 3D game ever? That isn’t a rhetorical question, I really want to know because it is awesome here. 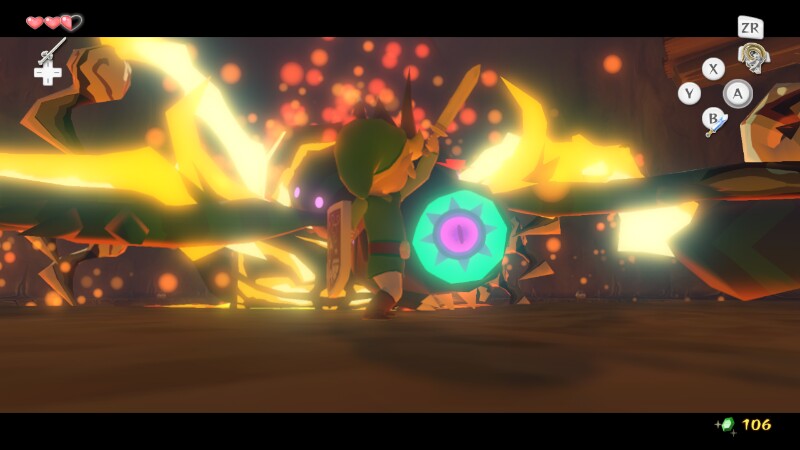 In addition to the major enhancements there are also a couple of new little touches. Utilizing Miiverse, players can write notes or snap selfies with the pictograph and leave them scattered throughout the overworld via tiny bottles. A lot of the time you’ll come across a cool little hint involving the surrounding area but mostly it’ll be something like “OMGTHISGAMEISSOKEWL!!” Wii U Pro controller support is also nice to see and to be honest it’s my preferred way of playing. Which isn’t to say that I don’t like playing with the gamepad ever. The touch screen is a great method for mapping items to various buttons and offscreen play is absolutely welcome for those private moments. It’s just a matter of battery life really, as the pad is well known for not lasting very long even with the brightness set down and power-saving mode turned on. Actually, what I’ve been doing is a combo: Playing with the Pro Controller and having the pad sitting in its cradle with the map displayed at all times. It works phenomenally. 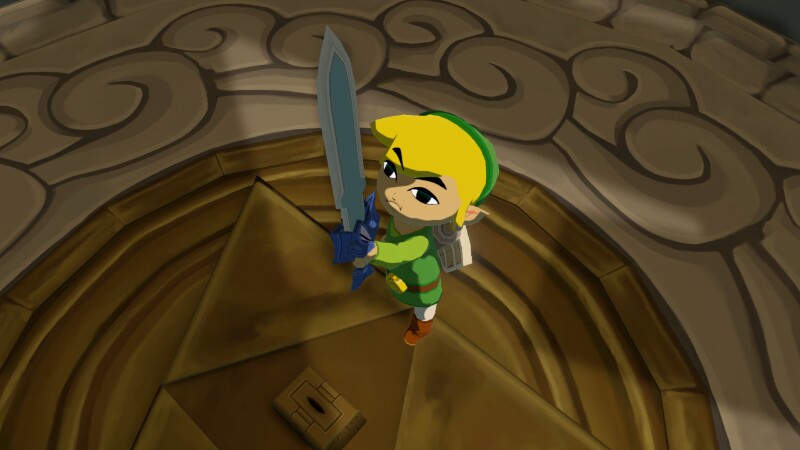 Of course, no game is perfect (except perhaps Super Punch-Out!!) and if I were forced to find something to complain about I guess I could come up with a couple gripes. After making a very welcome appearance in the 3DS remake of Ocarina of Time, there’s no boss mode to be found here. This is a real shame as the Zelda series has a long history of giving players some pretty amazing boss battles and it would be pretty nice if we could select them any time we wanted. We only get 3 save files on this thing, so what gives guys? The next “complaint” is kind of a stretch but I’ve always thought that this game specifically would have been a perfect fit for the Wii. To me, the Wii-mote seems like it would make a great substitute for the Wind Waker baton and motion controlled conducting is kind of a no-brainer. They could have even titled it The Legend of Zelda: Wiind Waker! Yes? No? Ehhh. Anyway, this control scheme could have easily been added as another option but like I said, no big loss. 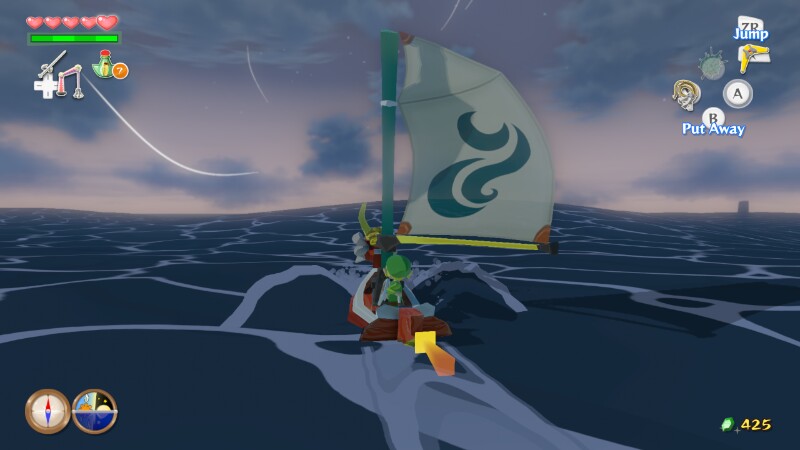 In many ways this remake feels like the game you’d imagine in your head when thinking about the original these past ten years. The HD graphics are a natural fit and the gorgeous music and expressive characters feel nothing short of timeless. But there’s one other slightly esoteric aspect I’d like to touch on because upon booting this thing up, something hit me like I’d never felt before. It’s no secret that I am sentimental to a crippling degree, spending far too much of my life waxing nostalgic about the past (I’m writing for Nintendorks for Christ sake). And when I first heard the sound of those waves and found myself gazing into the bright light of a beautiful high definition Sun glaring out over Outset Island, I felt an incredible combination of nostalgia and excitement for the adventure now on the horizon. Somehow a game that I’d played several times already throughout the past decade managed to feel fresh and I found myself impatient to discover all of its secrets all over again. I even came up with a word for it just now: Newstalgia. 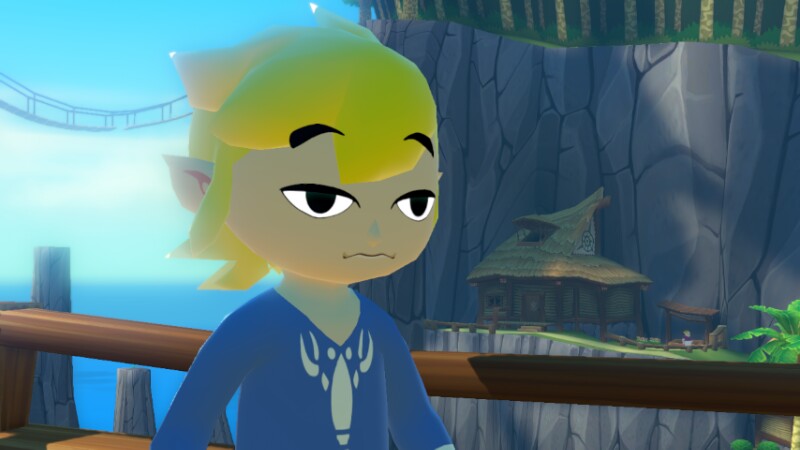 The fact that some players will already be familiar with this world will only help to make this gorgeous remake that much more intimate. It is the very definition of playing something again for the first time, offering a deep, rich and yes emotional experience.

So what do you say, Mr: Face? Did The Legend of Zelda: Wind Waker HD tickle your ding dong?