Well this doesn’t happen very often so you’d better believe that made it high time to embarrass myself in public by taking a bunch of awkward pictures! There are NINTENDO TOYS in Happy Meals right now. As in THIS VERY MOMENT. Like, you could actually leave your house and go buy them TODAY. This wonderful occurrence equals yours truly waking up long before his comfort hour to snag the complete lot as quickly as possible. The following post is a blow by blow visual re-enactment of said “collecting” and is jam-packed with half assed attempts at jokes courtesy of our very own brand of Nintendork humor. 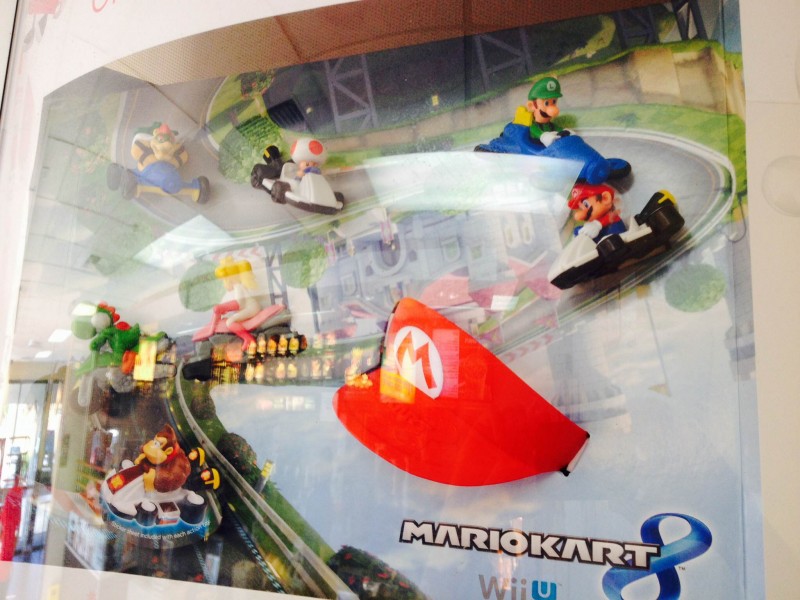 Let’s begin by strolling into our local MiccyD’s and having a look at the menu shall we? Glare be damned, I did the best I could taking this picture and you’ll just have to take my word that it couldn’t look any better. They have this display positioned at a very odd angle so it’s pretty much a miracle any of the toys are visible at all. I snapped this shot first thing after stepping inside which meant it was time to hit the back of the line to order. And on a hot Summer afternoon in a tourist town let me tell you, the line at fast food joints are looong. 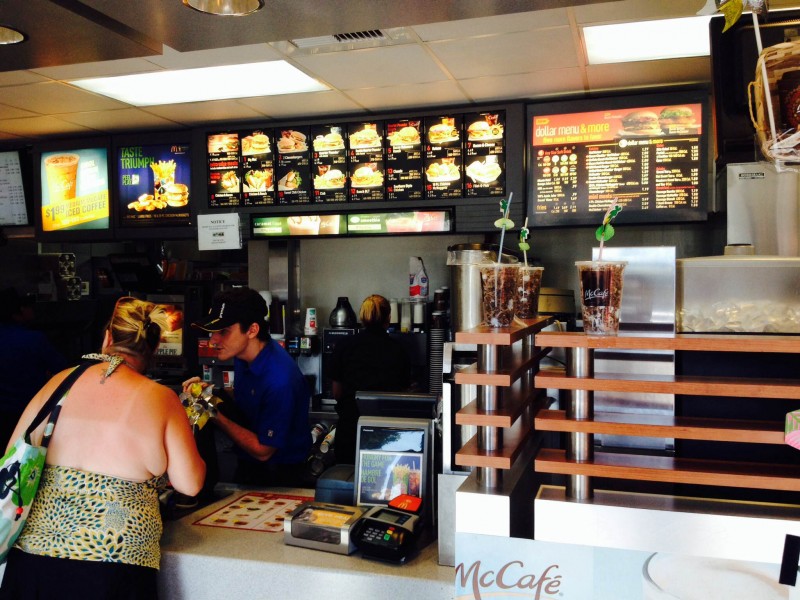 Say what you will about this woman’s bitchin’ tan line and side-flap, she actually proved to be awesome during this excursion. While the poor employee forced to wade through countless stacks of pre-packaged Happy Meal boxes to find each toy pondered unemployment, this lady actually stepped in to help! Help as in check each of the Happy Meals she’d just purchased for her 15+ kids to see if the last couple of remaining figures I needed happened to be in one of the them. This wonderful stranger was willing to throw her own bloodline’s prize under the bus just to make sure I walked out with a full set. I’m not really sure how to feel about that so I’m just going to go with a delicious cocktail of gratitude and shame. 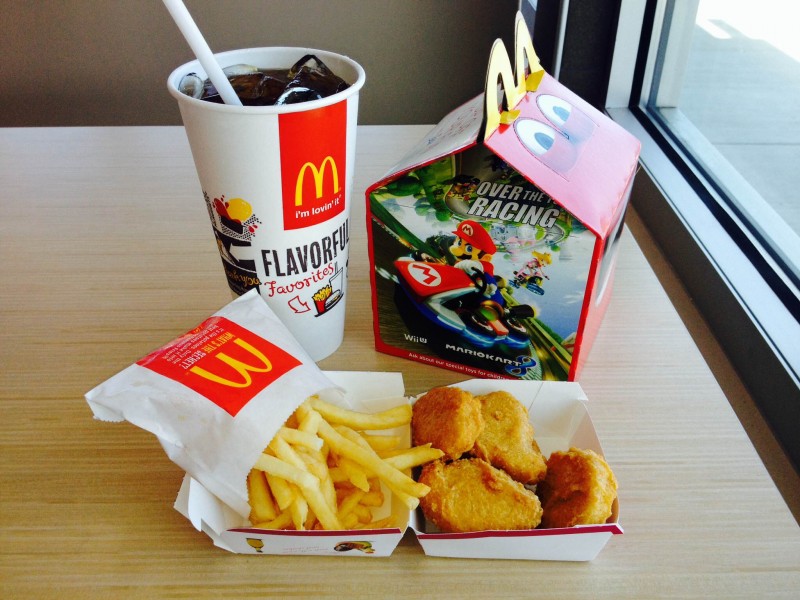 In the interest of creating the full experience I did actually order some food. Going with the six piece Chicken McNugget Mighty Kid’s Meal, please allow me full disclosure: Those little demons tore through my system like a stolen Ferrari. I guess that’s what I get for ordering the devil’s number. Also no, that is not the normal size drink that comes with a Happy Meal nowadays. I just really love Coca-Cola. 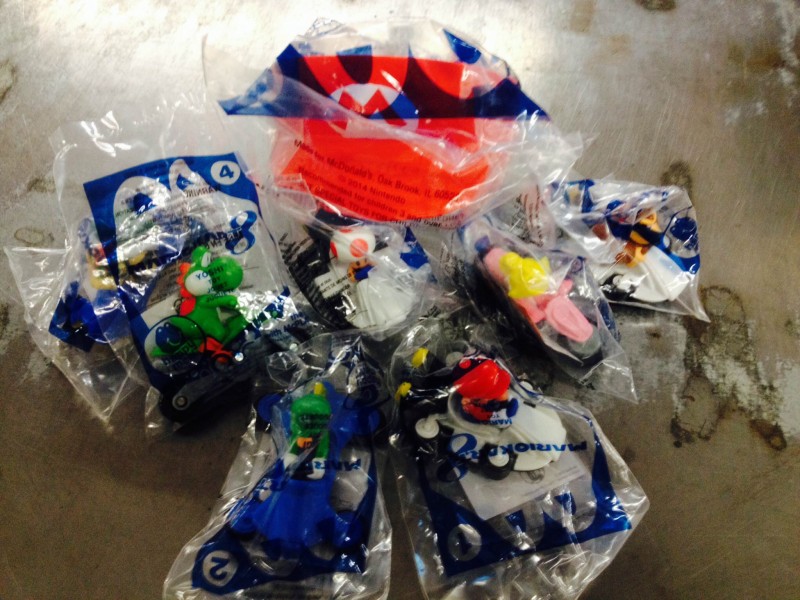 And Success! Originally I intended on writing 8 separate reviews, one for each individual toy. That sentence is probably the funniest thing I’ve ever posted to this site. So now that we’ve got the lot all gathered around, let’s take a closer peek! In order of worst to best of course:

Upon opening up that first package, you’ll notice that these guys come with a sticker pad consisting of decals for the karts themselves as well as little extras like character shots that you can, I dunno…put on your trapper keeper I guess. Donkey Kong himself is a solid sculpt but he’s at the bottom of the list because I just never liked him in general. So you see, this isn’t business, it’s personal. I have nothing else to say about Donkey Kong.

Bowser actually looks pretty good but much like DK, he’s a heavy character meaning his sculpt is kinda chunky. Each of the heads on these toys are intended to swivel and in that department, both Bowser and Kong are the most limited. You may notice in the background that our favorite Koopa King is also hiding behind something that oddly looks like a Mario Kart 8 themed visor of some kind. Well, that’s because the 8th “toy” during this promotion is a Mario Kart 8 themed visor of some kind! It’s far too small for any human to actually wear so I really have no idea what to do with it. Aside from drunkenly cut up my forehead trying to make it fit from time to time.

Toad is of course the smallest and arguably most adorable of the set. I should point out that the decals some of the Karts come with go on the sides and it took me a minute to figure out how to make it work. Hey, let’s see how well you fare without looking at the instructions! The coolest part of Toad’s figure is by far the fact that he is the only one that has a propeller attached to the back of his racer. A propeller that actually spins. I believe I’ve made my point, moving on…

Here we have the Princess of the Mushroom Kingdom (btw who the hell are the King and Queen?) sporting her typical pink outfit whilst straddling her hover bike. Being the only female of the set, I look forward to seeing the results from the nerds that eventually use her to customize their own Daisy and Rosalina. Waitaminute, that’s actually a pretty good idea. Shit.

Man, Yoshi kinda looks like a dick here doesn’t he? I think of the entire set, Yoshi will probably wind up being the most desirable and hard to find. Not only because he’s an incredibly popular character but because this is the toy that actually feels like something you’d buy in the store as an actual product as opposed to just just some made in Hong Kong throwaway. His head spins completely around as do the wheels themselves. Oh yeah, I should mention that. I kinda figured the wheels on the bikes would just be a hard sculpt with little spinning pads encased inside and exposed on the bottom but nope! We have real spinning wheels here people!

Ahhh, the year of Luigi may be a distant memory but with the internet craze of this guy’s Mario Kart 8 “death stare,” his popularity remains at an all time high. Personally I would have preferred to see him sporting the standard bike, but that’s neither here nor there. Luigi looks great and I’d love to see someone use these toys to create their own little stop motion racing videos. In fact, that would have been a pretty great extra to include: Each racer being packaged with a mini banana, boomerang, bob-omb, etc.

And pulling into the top spot is our main man Mario of course! Being the figurehead for the entire franchise and this line of toys, Mario definitely delivers the strong sense of confidence one looks for in a man great leader. Also if his complexion is any indication, the dude’s been racing through Dry Dry Desert a bit too often. Much like the character himself, this toy is a great all around sculpt. In fact I have to say that overall this is a really solid collection of figurines, not only for kids but clearly grown men that enjoy writing about this sort of thing for websites nobody reads. The promotion only began a couple of days ago and wraps up July 31st so I’d get out there sooner or later if you’re interested. And you should be!

For the love of God just stay away from those Chicken McNuggets.