Successfully Kickstarted in early 2013 and published by Dice Hate Me Games, Compounded is a Euro-style resource placement game that has lab chemists competing and cooperating to complete chemical experiments for points and glory! The resources in the game are atomic elements–you and your lab partners will be handling Hydrogen, Carbon, Oxygen, Nitrogen, Calcium, and Sulfur. Chemists set up their workbench, compounds are assembled in the lab, and initial elements are discovered–whoever discovers the rarest elements gets the lab key to go first, and let the science begin! 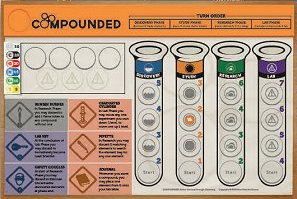 Your workbench is represented by your player’s card, and it has some very helpful information. It shows how many elements you can hold, how many compounds you can claim, the tools you might have earned (and what those tools do), and your four experiment tracks represented by test tubes – which also nicely coincide with the four phases of each turn. Those phases are:

Discovery – Beginning with the lead scientist, players draw random elements from a bag. Once everyone has drawn their elements, players may trade with one another. Other than points and experiment levels, players can trade just about anything–elements, tools, favors, promises, promises not to break those promises, whatever. Once everyone is done trading, it’s time to study some compounds.

Study – Beginning with the lead scientist, players place their claim token(s) on compounds in the lab. Once claimed, only that scientist will benefit from completing/scoring it. Other scientists may help complete your compound, perhaps as a favor due to trading in the previous phase, but only you will benefit score-wise when your claimed compound is completed. After you place all your claim tokens you have the option to move one (and only one) claim token from one compound to another. With compounds now claimed, it’s time to do some research!

Research – Beginning with the lead scientist, players may place elements from their workbench onto compounds in the lab. Once during this phase you are allowed to trade in three of the same element for one new element of your choice.

Lab – aka the clean up phase. Any completed compounds are scored, removed, and placed next to that scientist’s workbench. Any bonuses for completing those compounds are rewarded, and new compounds are drawn from the deck to replenish the lab space. If any fires break out, those are resolved. The lab key is passed to the next player to become the lead scientist, and another round begins! 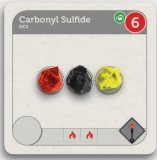 You also have the option to level up your Lab track instead of whichever track a completed compound says you can level. Leveling up the Lab track lets you hold more elements on your workbench. You can only hold 4 elements at the start of the game, so if you level up your Discovery track and start drawing more and more elements you’re going to want to make room since elements you can’t hold go back in the bag at the end of the Discovery phase. But what good is drawing more elements if you can only place two during the Research phase? Maybe you should advance your Study track so you can claim more compounds to place your elements…if you have enough room to hold all those elements. 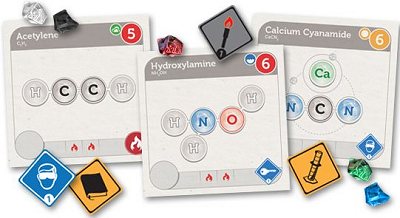 Before you know it strategy has snuck in through the Lab’s back door and you’re going to be weighing your decisions on how to best manage your workbench. Completing some compounds reward you with tools that can help you achieve your goals, such as a Lab Key that you can discard to go first the next round, or some Goggles to let you discover extra elements. As an evil bit of fun, there are only enough tools for everyone minus one!

Naturally, working with chemicals can be dangerous business, and completing some more volatile compounds can cause a chemical reaction leading to a lab fire. Lab Fire cards are also in the lab deck and pop-up from time to time. Whatever the cause–a random lab fire, a volatile chemical reaction, or an evil scientist using the Bunsen Burner tool–lab fires can be pretty destructive, so you better be prepared. The good news is each scientist starts the game with a fire extinguisher; the bad news is it’s empty! Once you place a carbon and two oxygens on it, though, your fire extinguisher becomes operational and can be used one time to battle a fire

Some compounds have either one or two fire icons to designate how flammable they are. Once a lab fire adds enough flame tokens to a compound, it explodes, sending its elements scattered to nearby compounds. This could work out well for you if you’ve claimed one of those nearby compounds, but if you’re the owner of a high-scoring compound about to explode, you’re going to want that fire extinguisher. However, if you end the game with a functioning fire extinguisher you’ll get 4 bonus points, so you’ll have to ask yourself if that compound is really worth saving.

The game ends with 1 of 3 conditions: if someone hits 50 atomic points on the scoreboard or completes 3 out of 4 experiment tracks, there’s one more round of play and then final points are tallied. If you need to draw from the lab deck but it’s empty, the game is over immediately. You’ll get some extra points as mentioned with the fire extinguisher, and for elements left on compounds and on your workbench. Whoever has the most points is the best chemist in the world! Move over, Antoine Lavoisier! 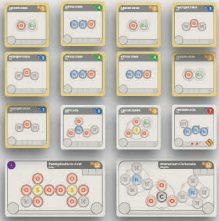 The Kickstarter asked for $15,000 and they got $139,358, so a lot of the components were upgraded. The quality is top-notch, from the wooden player tokens and first-player lab key to the colorful periodic table scoreboard. The element pieces look very cool, and the cardboard components are nice and sturdy. The extra money also allowed them to include an in-spansion called Lab Partners where the bottom row of the lab can be two large compounds that up to two chemists can claim and complete together.

I can’t think of any other chemistry games off the top of my head, so kudos to Compounded for an original theme and making chemistry fun. With the lab tools, workbench, element pieces and periodic scoreboard, the theme is consistent and works great. Chemists will feel smart for recognizing compounds, and non-chemists will feel smarter for pretending to be a chemist.

Each of the turn’s four phases have nuances to remember and get used to, but after a few rounds–and definitely after a game or two–your actions seem clear. Everything is reasonably straight forward–discover elements, claim compounds, place elements, score completed compounds, repeat. Your workbench is a great reminder of each phase and what the tools do. Thanks again, quality!

Again, the game is fairly simple in that you are managing and placing resources, but has enough cool side mechanics like the tools, leveling up your experiment tracks, trading, and lab fires to keep things interesting. There’s a small luck factor based on what elements you draw from the bag, but the game compensates nicely for that with trading, the ability to convert elements 3-1 during the research phase, as well as each player getting a one-time use “wild element” along with their fire extinguisher.

Solid, fun gameplay. It’s simple enough for younger players to grasp and enjoy, and strategically competitive enough for more hardcore gamers. The game strikes an excellent balance between simple and strategic. The trading aspect makes it a fun social game to boot! It’s definitely best with 3+ players, but there’s also the option for a 2-player game using Nobel, a neutral player’s workbench.

Compounded has been a slow burn. The more I play it, the more I like it and the more I want to play again. Every single person I’ve introduced the game to has had the same reaction. The game strikes a nice balance between simple and strategic, and competitive and cooperative. Everything can seem friendly and pleasant for a few rounds, but as soon as someone gets their hands on a Bunsen Burner tool, or breaks a promise, or claims a compound someone else wanted, all bets are off. In the course of a game you can go from meek chemist happy to be working on Calcium Oxide to a mad scientist striving to make Acetylene to blow everyone up.

Expansions: As a Kickstarter reward the Chemical Chaos mini-expansion was sent along with the game. Chemical Chaos cashes in a bit more on the competitive side of the game, adding compounds that reward the player with the ability to steal an element from another player, or add poison (negative points) to an opponent’s score, along with a couple other new compound mechanics.

Compounded is unfortunately out of print at the time of this review, but if you’re thinking “dang, this game sounds fun! Where can I get it?” You’re in luck because a new expansion is currently being kickstarted with the option to buy the base game along with Chemical Chaos.

The Geiger Expansion adds radioactive elements and compounds to the game along with a workbench extension and a new interactive mechanic that has players working together to keep radioactive levels at a safe number. As of today there’s 11 days to go in the campaign. They’ve already well-exceeded their goal, so pledge with confidence and hop on board to enjoy those stretch rewards as well.