According to my spreadsheet, I checked out almost 100 albums in 2015. And according to my iPod, about 60 made the cut. Here’s 20 albums I enjoyed in 2015 enough to write something about them so that maybe others can enjoy them too!

Disco is not a popular genre, but when it’s done well it’s hard to deny. I liked Escort’s first album back in 2011, and while Animal Nature feels a little more glossy and “studio” than their debut, that doesn’t stop it from being any less fun. One of the things that sells me on them is their live videos show a 17 piece band; not two people and a laptop. You didn’t know you wanted a disco cover of St. Vincent before this Escort album, but now you do.

I’ve been a fan of sweaty Jon Spencer’s glam funk boogie for…good lord, almost 20 years? He’s pushing 50 now, but that isn’t stopping him from being one of the hardest working rockers in the business. Album after album he kicks out the jams, and I’m very thankful their hiatus is over. One thing I’ve always liked about this band (other than the drums of Judah Bauer) is how dependable they are. His first album was the big bang, and each album after just continues the explosion.

Confession time! I really really really really really really really liked this album! I don’t know why that mundane chorus was her choice for the first single, because it doesn’t do this album justice. Granted, this is all sugary 80s retro-pop, but it’s GOOD bubblegum pop. If Jepsen set out to make an overall good album instead of hoping to cash-in on another “Call Me Maybe” and be done with it, mission accomplished. Front to back this is one great pop album.

As soon as I heard Lizzo it seemed like she was everywhere. Sleater-Kinney asked her to open on their reunion tour, Sadie Dupuis of Speedy Ortiz and Lizzo collaborated for some Google experiment, Prince put her on his album…I think she’s everywhere because she can do everything–she’s a rapper with soul and personality, and I feel like if there were a bridge between Beyonce and Killer Mike, Lizzo would be on it–or maybe she built it. Also, bonus nerd points for sampling Navi’s “Hey! Listen!” in one of her songs.

When it comes to that loud-quiet-loud sound of the 90s, Feels Like is a pretty good album. A little Nirvana here, a little Dinosaur Jr. there, mix in some Breeders…nothing completely new, but also nothing stale. What really shines is frontwoman Alicia Bognanno. Not only does she have the pipes, but she wrote, produced and engineered this great sounding album. And if this is their (her) debut, I can’t wait to hear what’s next.

15 Titus Andronicus – A Most Lamentable Tragedy

Héloïse Letissier was inspired by drag queens to create music while nursing a broken heart. She describes her genre as “freakpop”, and identifies as pansexual. She declares “I’m a man now” on the first song of the album. There’s a lot going on here, but in its simplest form, this is a solid pop album. The lyrics are deep, the music is smooth–I don’t want to say the album is flawless, but it sounds flawless. Everything flows and feels effortless. All it takes is one viewing of any of these videos to realize this is an artist with a lot to offer.

Blackalicious was one of my favorite groups of the early 2000’s, and I had resigned to the fact that there would be no more Blackalicious albums. And then Imani Vol. I came out and all was right in the world. It’s not a groundbreaking hip hop album, but it was definitely worth the wait. Sing along choruses, funky horns, strutting pianos…yep, it’s a Blackalicious album alright! The album accomplishes its mission: it helped me forget I went 10 years without a Blackalicious album.

Shilpa Ray was new to me this year, which made me regret not hearing her sooner. A genuine “whoa” moment of 2015 was when I first played this album. Her voice reminds me of part Deborah Harry and part Stevie Nicks while still sounding original. She can howl, and she can woo, and I’ll take everything in between.

This is probably my favorite debut of 2015. I wasn’t expecting much from a Kentucky garage rock band, but damn if White Reaper didn’t go above and beyond in making one of the catchiest, rockingest albums of the year. With a dash of glam for seasoning, this is the album you want to play loud while driving with the windows down. If you’re looking for a 1970s fuzzed out pop punk album, check this out.

10 Du Blonde – Welcome Back To Milk

I’ve started writing and deleting stuff here a few times now. I honestly don’t know what to say about this album; I just know it’s cool. Du Blonde is cool. Its one of those albums that can go from raw primal rock to a soft piano ballad, and it all fits together. Is Du Blonde a Bowie-esque character? I don’t know, but I’m pickin’ up what they’re puttin’ down. Bonus points for snagging Samuel T Herring to make a guest appearance.

Chance the Rapper’s Acid Rap made my 2013 list. It’s a great album that had some good success, but instead of caving to industry demands and quickly releasing another album, Chancelor Bennett decided to share the love and bring some of his friends into the spotlight. Those friends being Donnie Trumpet & the Social Experiment, some of whom who also served as Chance’s backing band. So, this isn’t a Chance The Rapper album, but in a way, it is. He’s featured heavily throughout the songs, but the music is more soul and jazz than hip-hop, and it’s great. “Sunday Candy” is also one of the more joyful videos of the year.

I lied. This dream-like, romantic album is my favorite debut of the year. Every time one of her songs came on my shuffle I had to pause for little Desperado moments. It sounds classic yet ahead of its time, which I think means it’s timeless! It’s orchestrated beautifully, and her voice is just as pretty. The final track straight up sounds like a Disney princess should be singing it. One of the more unique releases of 2015.

Last year, Staples’s “Hell Can Wait” made my honorable mentions list. This year, I knew Summertime ’06 was definitely making the list. I don’t know if you all heard, but Kendrick Lamar released an album this year, and it’s very good! For whatever reason, though, I’ve listened to this album in its entirity more times than To Pimp a Butterfly. After the year we just had, his subdued “I ain’t never ran from nothin’ but the police” chorus from “Norf Norf” hits just as hard as NWA’s protest song from almost 30 years ago.

Virginia native Will Toledo has been releasing Bandcamp albums since 2010, and recently signed to Matador. His “debut” Matador album is Teens of Style, a compilation of past songs, re-recorded to make a “new” album (there is one bonafide new song). It’s a great idea/intro to the band, because as much as I like this album, I don’t know how soon I’m going to go back and listen to his ELEVEN Bandcamp albums. When I see eleven albums recorded in five years I can’t help but think of Robert Pollard, and the Guided by Voices comparison carries over sonically–the album blends lo-fi indie rock and with dreams of stadium classic rock, and has juuuust enough production to make it more than a simple bedroom recording. That’s not to say the songs aren’t personal. I’m all in, and can’t wait to hear the new material–which I’m guessing will be 2 or 3 albums in 2016.

Royal Headache’s first album made my 2012 list, and on first listen I knew their sophomore album would make my list this year. The singer, Shogun, showed in their debut that he could easily soul-yawp over every song, but this time through, he knows when to hold back, so when he unleashes those growls it hits even harder. This album is a little more refined then their high-octane debut, but the adrenaline and catchy hooks are still there, and High is clearly a step forward for a band I hope gets their shit together and stops saying they’re going on hiatus.

Shamir is a 20 year old who clearly time travelled back to experience Studio 54, then to the future, then returned to 2015 to make this album. “On The Regular” was probably my most played song of 2015. Ratchet is a tried-and-true electronic funk dance album, but it’s eclectic enough to be a bit more than that. He balances nicely between no fucks given, and lots of heart. Overall though, it’s just fun. If “muppets + LCD Soundsystem-meets-Michael Jackson” sounds good to you, check this out.

3 Sleater-Kinney – No Cities To Love

I freely admit this is so high on my list for purely nostalgic reasons, but this album goes beyond nostalgic and enters time-travelling. I hear this LP, and I swear our bands played together–this music is what my friends and I listened to and played in basements and bars at college. What puts Radical Dads over the top in my book is I can tell they aren’t even trying to sound like an album I would wear out on my college radio show. They, like me, lived and breathed Pavement and Blake Babies and Dinosaur Jr through college, so when they play together, this is what naturally comes out. They even got the Wowee Zowee artist to make their album cover. They’re wonderful. 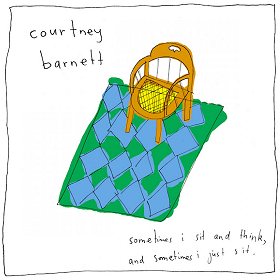 2015 is the year of debut LPs, apparently. Barnett had some slacker-rific EPs before, but her debut LP is big league stuff. If her album had a movie poster, my alliterative review would praise her “wry witty wordplay!” Whether it’s a grungey rocker or an indie ballad, her impressive feat is making the extraordinary out of the ordinary. Even her instruments aren’t anything wacky–just guitar, bass and drums with the occasional organ, but the songwriting is so catchy and clever it becomes extraordinary. I don’t mind the fact that more than one song reminded me of Sheryl Crow’s “All I Wanna Do…” That’s a fun song! And this is a fun album.

Take “Elevator Operator“. On paper it’s a simple story about Oliver Paul, the bored protagonist who skips work to go to the top of a building, but the chugging beat and fun story elevate (pun intended) the song to something more. She can take staring at a wall, and make it interesting. Is she daydreaming out loud or singing? The first half of “Depreston” is a gentle and pretty description of a house (“Aren’t the pressed metal ceilings great?“) then the second half switches to the bittersweet refrain “If you’ve got a spare half a million, you could knock it down and start rebuilding”. Are her songs sad? Funny? Uplifting? Nonsense? Deep? Yes. I won’t argue that this is the best album of 2015, but it was definitely my favorite album of 2015.

Thanks for reading! Here’s a YouTube playlist with some of the above links, and a crapload more songs from more albums I enjoyed in 2015: