When Nintendo first announced their new concept of combining video games with cardboard DIY, I thought it was a crazy idea with a lot of potential to be a massive sales success. I mean, kids love this kinda stuff right? With their damn Lego and the Minecraft and whatnot. But that’s also where I felt that it just wasn’t something I’d be able to get into myself. While the appeal is certainly easy to see, for me, when they’ve released this sort of thing in the past (Mario Paint, WarioWare DIY, Super Mario Maker, etc.), I always wound up having more respect for the creativity at work then actual fun with the experience. So as the launch date approached and the gushing reviews started to flow in, I was still more happy for Nintendo than convinced I needed to buy the thing. But of course, the big day comes and the sheer volume of joy pouring out of various social media posts turns my lack of interest into full blown curiosity. “What exactly is up with this?” I decided to go the mall with the thought that if they just so happened to not be sold out then y’now what? It’s meant to be.

You can probably tell where this is going. 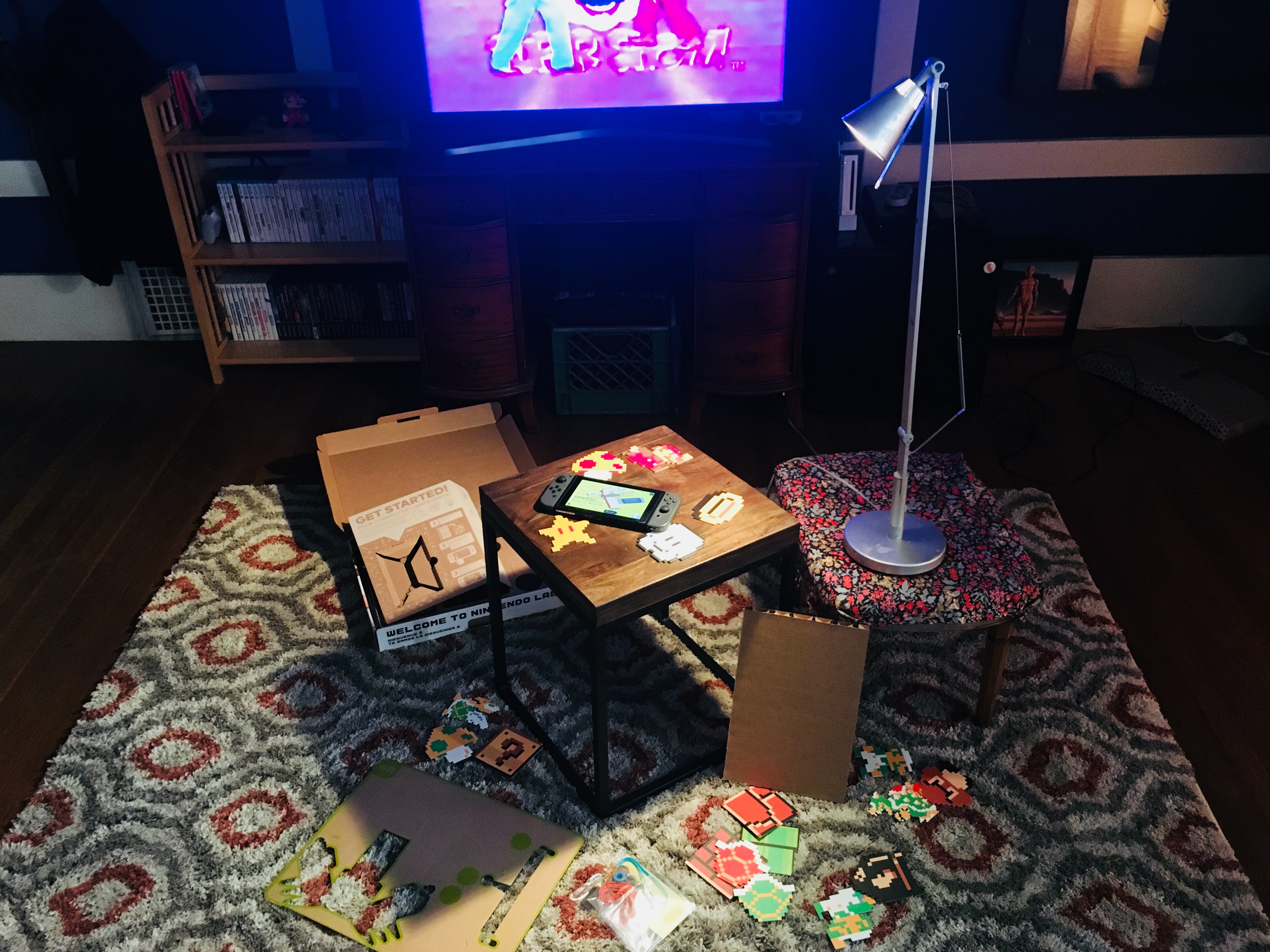 Welcome to my laboratory! Right away I had a good feeling about Labo as the employees were downright delighted to be talking about which set in the pack was their favorite, how much fun they’re having with it and of course that piano. People are all ABOUT the piano! The first thing you’ll notice if you decide to make the plunge is how heavy the packaging is. Man that sure is $75 worth of cardboard! It’s also a huge box so get ready to feel real weird walking out into the parking lot with an Ikea sized bag that says Gamestop on it. 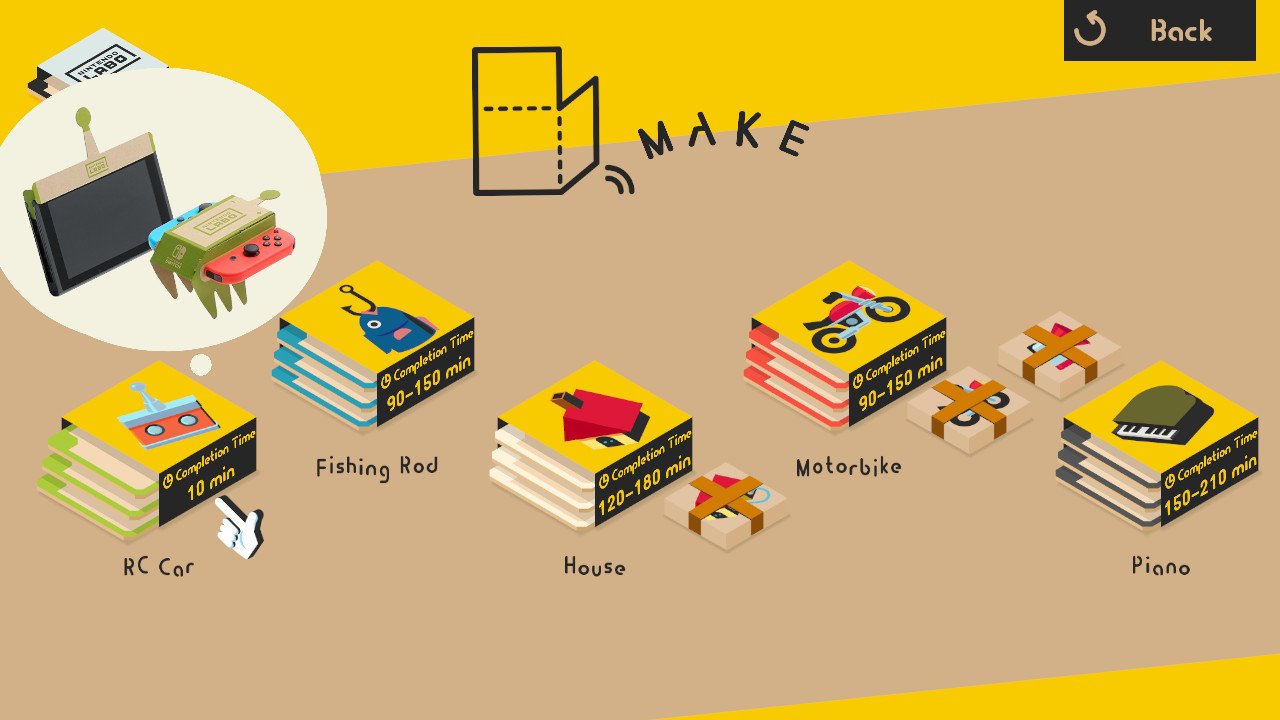 Using the Switch tablet as your touch screen instructional guide could not be a smoother or more intuitive experience because y’know, when it comes to nailing presentation Nintendo is the best. The menus are clear, the music is pleasant, the dialogue can be genuinely funny and just really, please tell me when was the last time you enjoyed reading instructions? The first object you’re asked to put together isn’t all that special as it’s really only intended to be a way to help you familiarize yourself with what you’ll wind up spending the next Miyamoto knows how many hours doing: Popping out and folding up cardboard using the screen as your step by step guide. 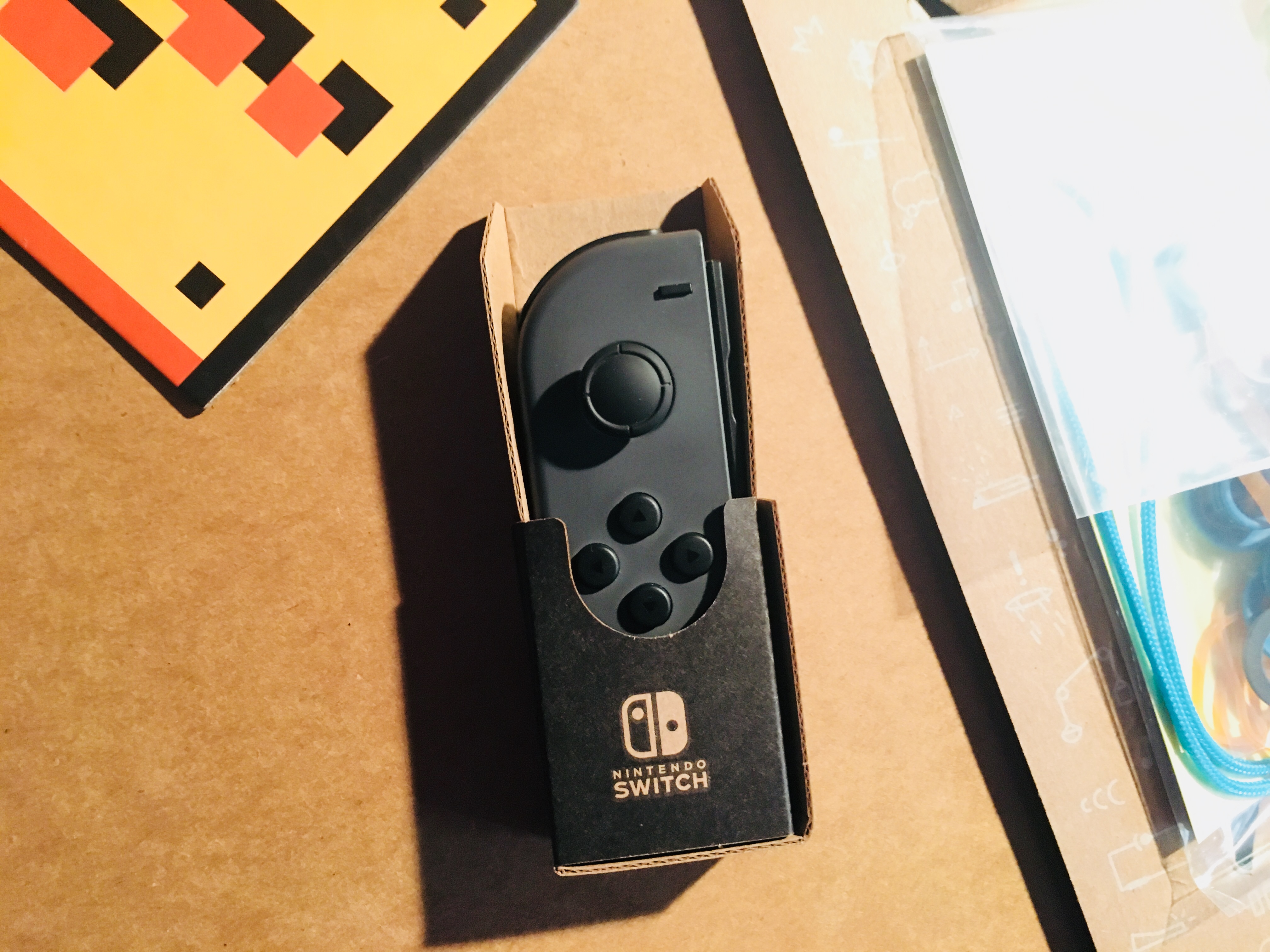 (Spoilers: It’s a little joy-con controller holder and I’m pretty sure one of the cats already got to it.) 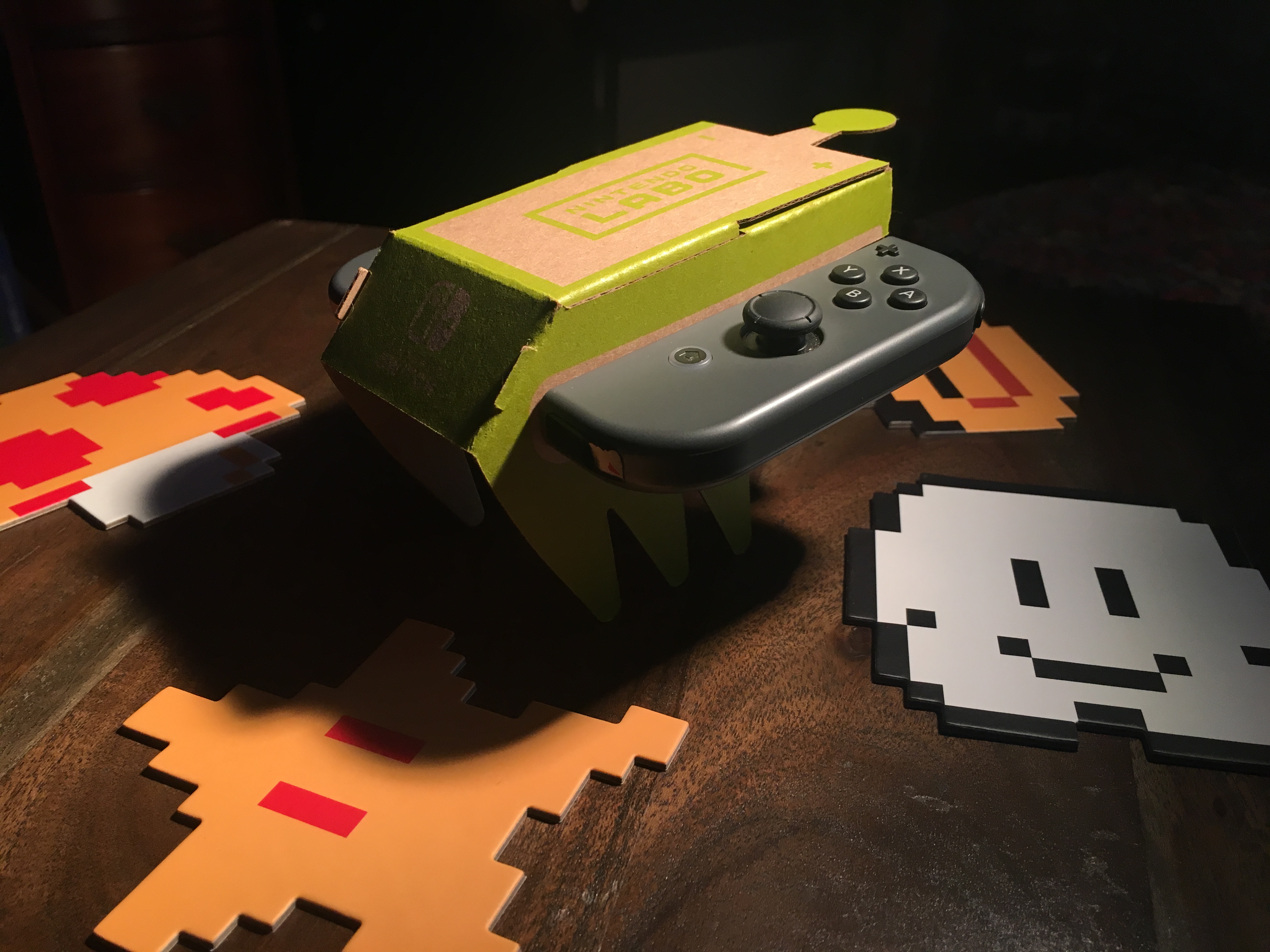 So with that little intro out of the way it was on to the first of the five projects that the variety pack comes with: The “RC Car.” Now the first thing that I’d like to point out when it comes to putting these together is that boy, Nintendo sure knows how to make stuff feel satisfying! The way the cardboard snaps into place isn’t unlike the feel of locking your joy-cons into your system complete with a little sound that really taps into some kind of pleasure zone. The car comes together very quickly and once you’re finished with the “Make” area, you move on to “Play.” It’s here where everything came together and has had me grinning like an idiot all day. Putting the car on the ground, your Switch is now a touch screen controller with 2 large buttons that manipulate the HD Rumble. Pressing them, you can make the car spin around and move wherever you want! Soon you’re allowed access to see the “innards” of the controls where a camera window is revealed, showing you POV from the car’s perspective. 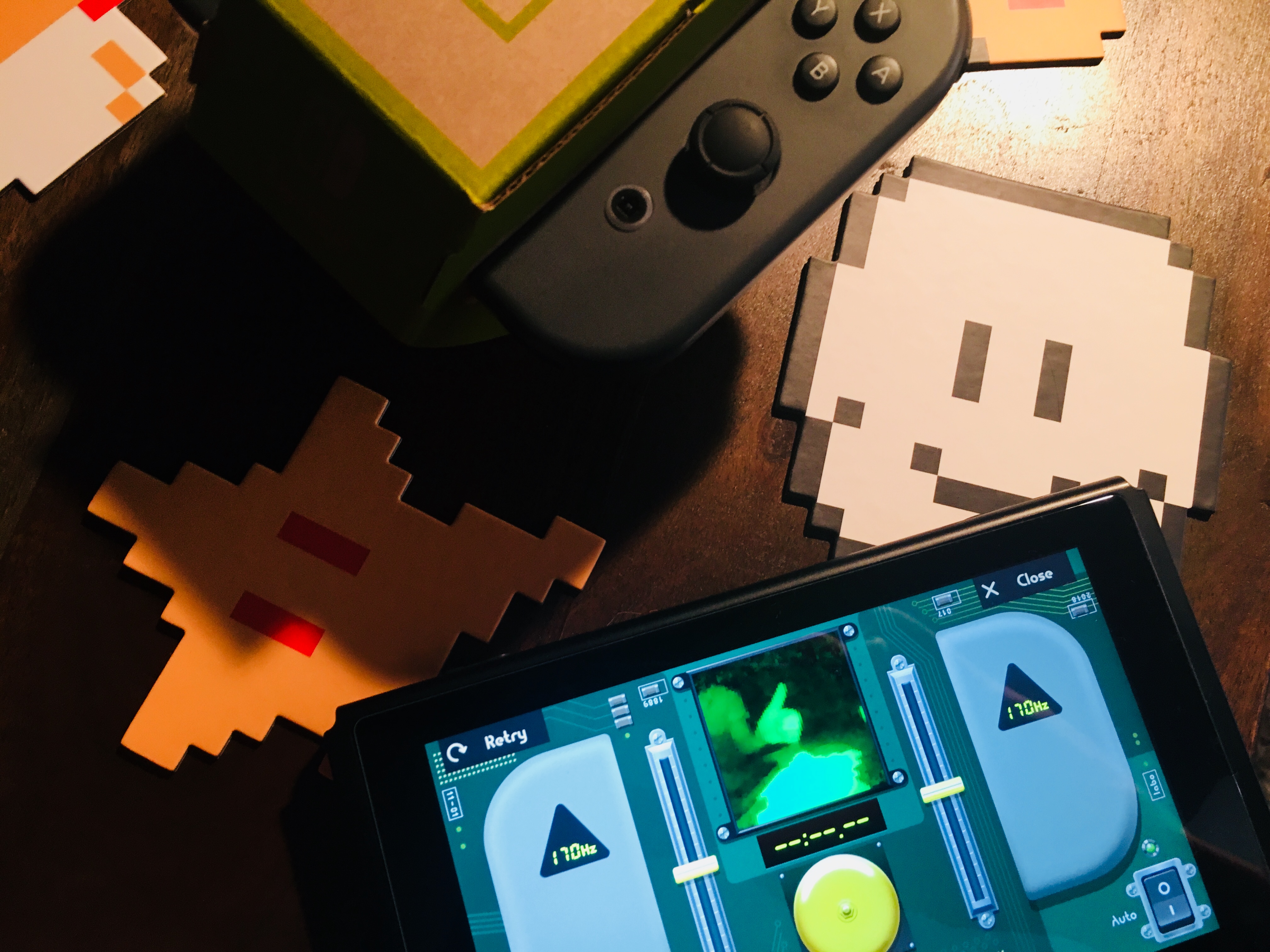 I’m sorry what now? I had no idea the joy-con had that camera built in, did you!? It’s a small touch but one that is so insanely cool. This “RC Car” is for sure going to be the first thing that I show off to people when I pretend they asked me to tell them all about Nintendo Labo. 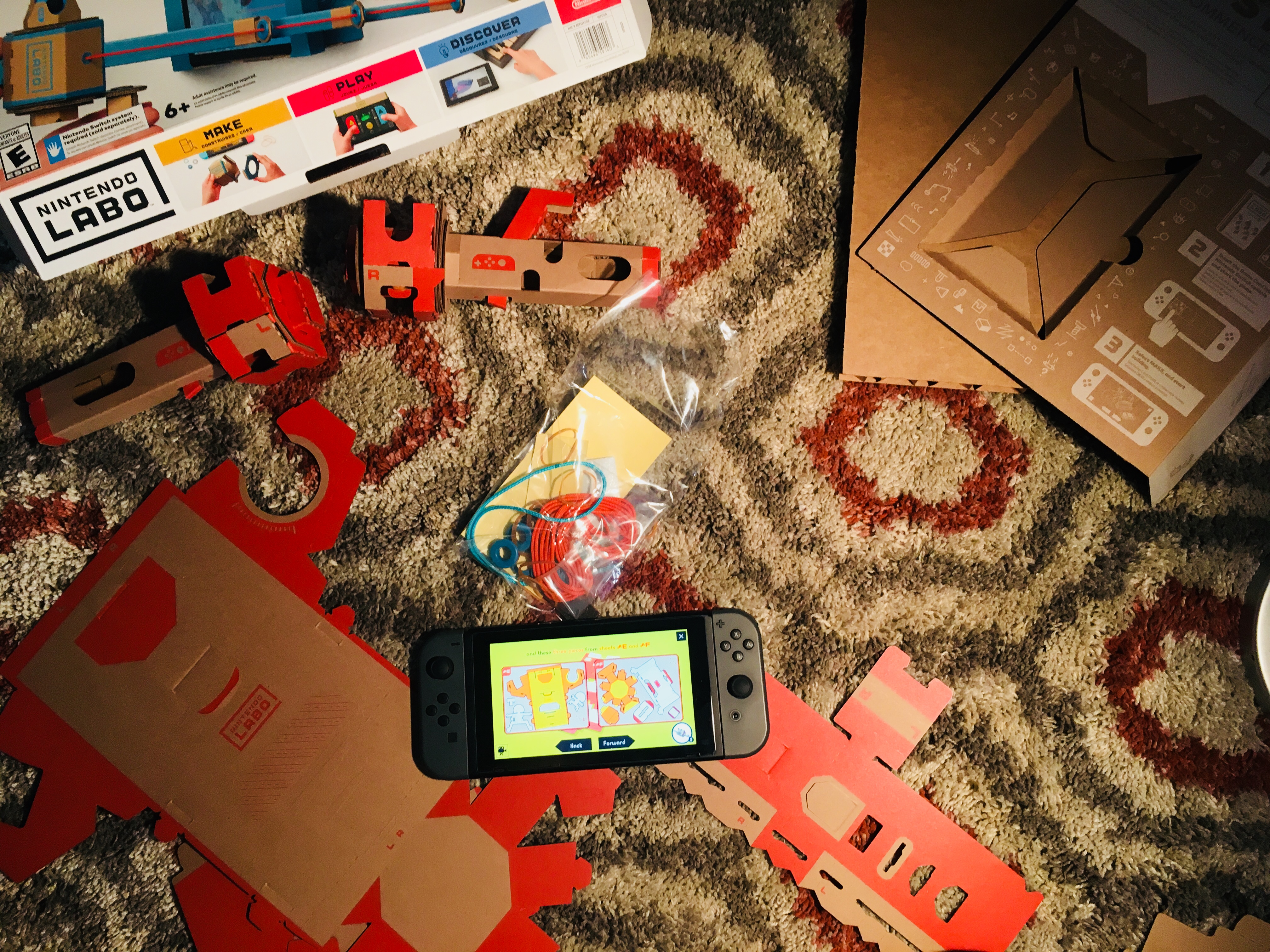 After that, I had the appetite and it was time to build something else. There’s a seemingly suggested order that Nintendo has placed on the menu but I skipped over Fishing and the House and went straight for the Motorbike. This was the first real project that took some time to put together but it goes by so pleasantly that aside from the back pain, an hour and a half hunched over felt like nothing. And the satisfaction of having a new video game to play after you’ve been sitting there making origami out of pizza boxes simply cannot be overstated. 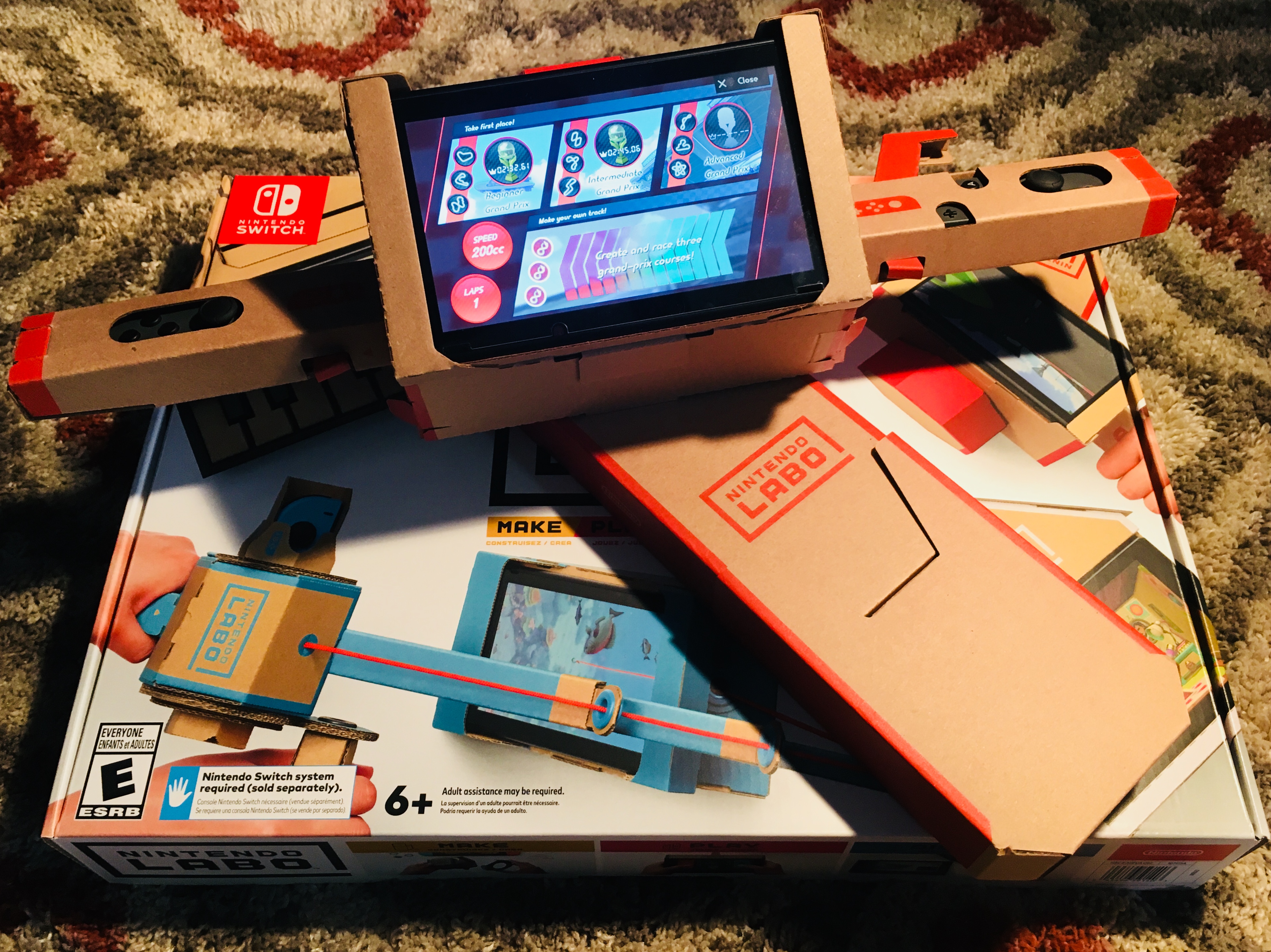 After finishing up the handle bars and taking a few spins around the laps of the Motorbike game, a realization hit me: And yes, it was that whole “it’s not the destination, it’s the journey” thing. While playing the software is certainly a treat, there’s only one first time you’re putting these kits together and that’s what makes Labo as a whole so very special. It made me stop for a bit to save and relish the time it will take to put together the rest of the pack because while the finished product certainly feels great, the real fun was making it happen. I’m saving that piano for last not only because I know it’s gonna be a real beast of a time guzzler but also because the process is something that I’m looking forward to being wrapped up in.

Besides, I have a house and ocean that needs building. 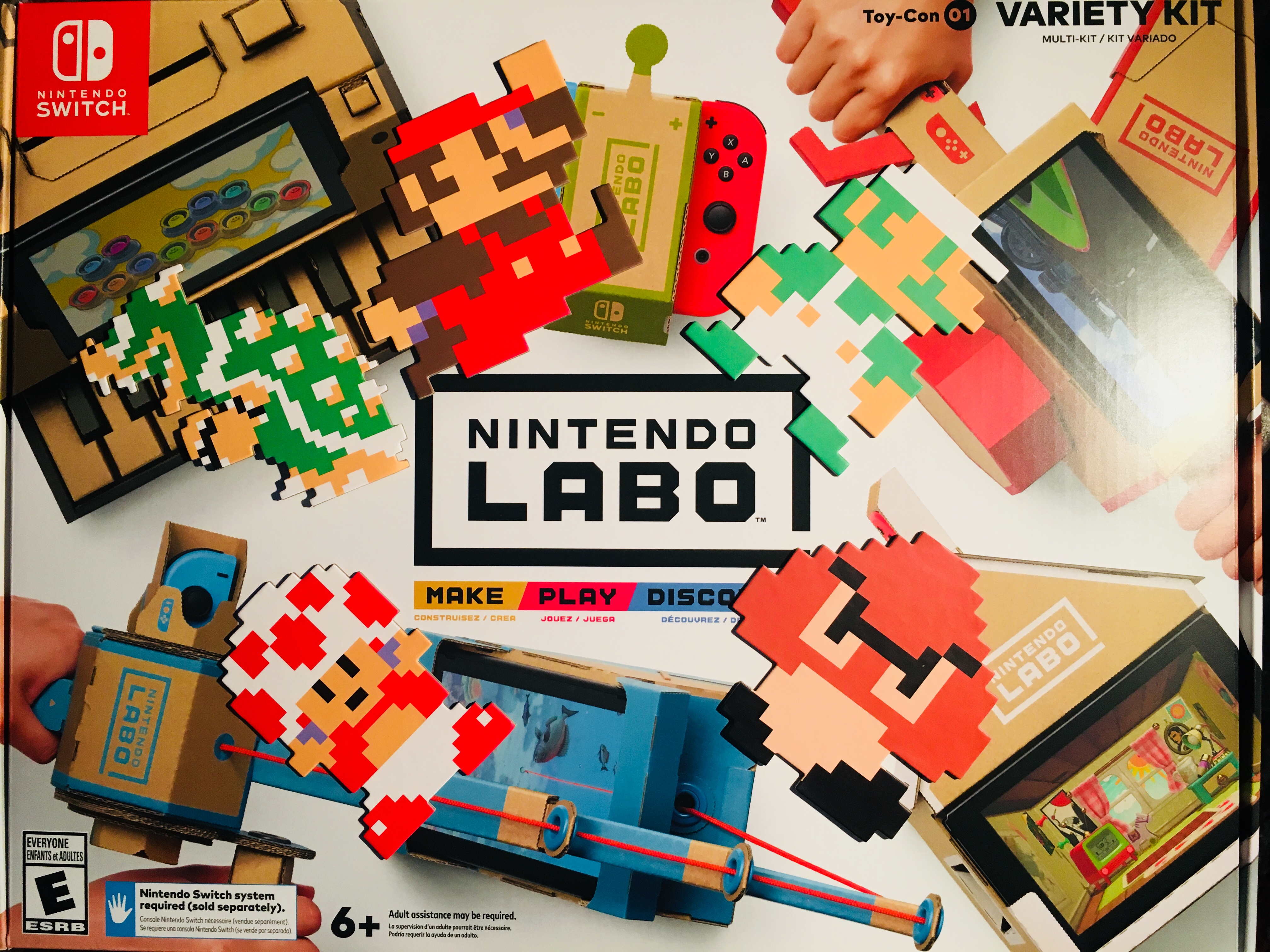 Oh and these 8-bits cutouts did not come with the set. I just wanted to make you jealous.