It seems impossible to write an introduction to this review, especially considering how self-explanatory the title is. Here: “The Beatles: Rock Band” is a “Rock Band” game with the Beatles in it. You have guitar, bass, drums and this time, up to three microphones, and you faux-play music using on-screen guides. It is amazing. If you have any affinity at all for “Rock Band” and the Beatles, you should go to the store and purchase it. “Well,” you say, “that was not a very comprehensive review. How am I supposed to make an informed purchasing decision? How about some details and comparisons? What exactly makes it amazing?” Okay. 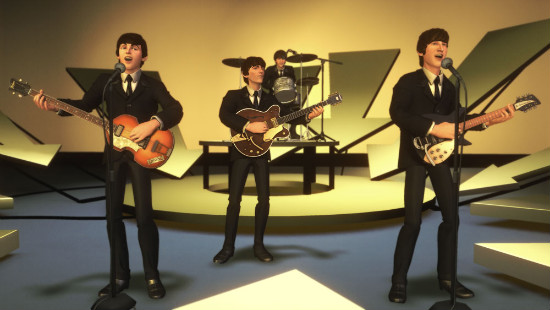 “The Beatles: Rock Band” is the Harmonix take on dedicating an entire rhythm game to one band. It is also the first time that they have featured real people in one of their rhythm games. Neversoft has tried both of these in post-“Legends of Rock” “Guitar Hero” with varying levels of success. Kurt Cobain’s recent appearance in Guitar Hero 5 is certainly on the “shitty” end of that spectrum. “Guitar Hero: Metallica,” on the other end of the spectrum, was fairly well-received, but at the end of the day it was “Guitar Hero: World Tour” with a lot of similar-sounding Metallica songs and some songs by other bands to fill it out. Metallica, as a band, don’t have enough variety and legitimately good songs to fill up an entire game.

I think the Beatles may be the only band that actually merits an entire game. They are easily the biggest name in rock, even 40 years after disbanding. They have an absurd number of legitimately great and recognizable songs. Their career spans an incredible variety of musical styles. They have a compelling band story with a definitive end. One aspect of their music – extensive use of vocal harmonies – becomes a great addition to the Rock Band featureset.

Let’s break that down after the jump.

Familiarity. The Beatles were bigger than Jesus. They probably still are, if your metric is being associated with songs you want to sing along to. Everyone knows the Beatles’ music, and just about everyone loves it. The most fun songs to play in Rock Band are the ones you already love listening to. Do the math.

Variety. The Beatles’ career spans a plethora of musical styles – everything from early ’60s rock and roll covers to psychedelic masterpieces to proto-metal. This keeps things from getting boring, unlike the catalogs of most bands.

Story. Rock Band has always lacked a truly compelling “campaign” of any kind. Band World Tour was always just something to do while playing Rock Band. However, once you see the breathtaking opening cinematic, the story mode in “The Beatles: Rock Band” will be something you actually want to play, just so you can see more of that. In addition to the lavishly produced cinematics, the backgrounds are detailed recreations of famous Beatles performances, including the Beatles themselves. By sticking to cartoony caricatures, Harmonix doesn’t get caught in the uncanny valley, and the Beatle avatars end up wonderfully expressive. (Ringo just looks so happy to be there!)

The myth of the Beatles is certainly sanitized a bit to minimize the whole messy break-up aspect. Ringo plays drums on “Back in the U.S.S.R.,” and there is no digital Pete Best. But imagine if Guitar Hero: Metallica had attempted to be that band’s biography? “Heavy metal rockers make some great albums, cut hair, suck, hire a band therapist, desperately attempt to regain former glory.” Not the most satisfying narrative arc, and no amount of fudging is going to fix that.

Harmonies. You remember how I said you’d want to sing along to these songs? The game is totally on board with that. Up to three separate vocalists are supported, enabling you to harmonize poorly with your friends. The game presents three vocal lines, the main one in blue. Successful harmonies net extra points, but failed harmonies are just missed opportunities – no penalties unless you mess up the main (blue) vocal line. In practice, this means you can suck really bad at harmonizing but still have a fun time singing along while playing an instrument.

Conveniently, each mic isn’t tied to a specific harmony part, so you basically just sing whatever you like – you just have to stick with that choice through each individual vocal phrase. That way, you and your best pals can switch between vocal parts on the fly without having to dick around with in-game menus or trading microphones. The intro to “Paperback Writer” and the John/Paul trade-off choruses in “I’ve Got a Feeling” come to mind as particularly great demonstrations of how much fun having more than one vocalist can be.

All these elements come together into the most fun iteration of the Rock Band formula to date. The standard guitar-bass-drums-vocals formula combines with the essence of the Beatles to make one hell of a package. It’s also easily the most accessible Rock Band to date. In addition to the very cool drum trainer and vocal harmony tutorial modes, most of the songs are pretty easy to play, though they don’t lack in fun. (I guess that could be considered a downside. If you haven’t already figured it out, Beatles songs are markedly easier than say, Iron Maiden.)

Yeah, downsides. The game only has 45 songs, compared to the the standard 80-something most rhythm games contain nowadays. You also can’t export them to use in “Rock Band 2.” I assume this is because it was absurdly expensive and restrictive to license the Beatles. Consequently, it only takes about four hours to go through the story mode first time through. Really, though, are you going to play these songs only once? I plan to return to this disc frequently, especially with all the full-album downloadable content on the way. I can’t wait to play Abbey Road’s B-side medley uninterrupted. It should be epic.

As I stated before: This game is amazing. If you have any affinity at all for Rock Band and the Beatles, you should go to the store and purchase it. Now.

*Note: While the game is being released on the Wii, this review is based on the Xbox 360 version of the game and written by a gigantic Beatles fan who has tried to be as objective as possible. Make your decisions accordingly.*