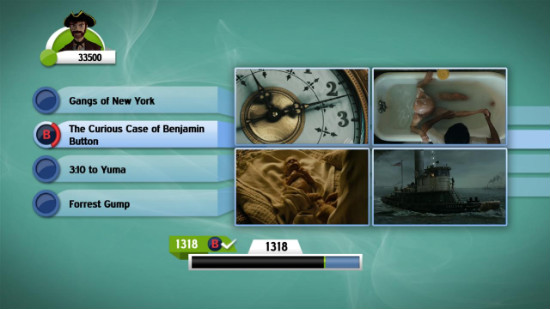 The “Scene It?” trivia games have always been more of a gimmick than actual fun party games. A movie trivia game with audio and video is a good idea, but awkward DVD menus, slow navigation, repeating questions, and a completely unnecessary board were all obstacles to making it a good party game. The recent video game versions on Xbox 360 have been a far better experience, but they were a bit overproduced – you don’t want to watch poorly animated cutscenes, you want to answer trivia questions. The new mutliplatform “Scene It? Bright Lights! Big Screen!” has fixed many of the annoying issues with the previous games, but I’m not sure if that’s just because it seems to have been produced with a much smaller budget.

I’ll start with the good stuff: This is easily the best version of “Scene It?” ever released, mainly due to what appears to be a vastly decreased budget. There are no fancy animated backgrounds or between-round cinematics that attempt to shove a narrative into a party trivia game, just basic abstract background art with simple transitional animations.

The annoying host remains, but he can be disabled completely. There are also a transitional animated shorts that occasionally pop up, but they are indeed short and easy to ignore. Overall, it’s very clean and streamlined, which is ideal for a general-interest party game.

There are unfortunately some problems. The font used throughout the game is extremely small, especially for a Wii game. It was annoying on a smaller HDTV, and it had all the players squinting on an average standard definition CRT.

The game also only supports four players, which is a shame. This kind of game should support as many players as possible, and it would’ve been feasible to increase that count to eight by supporting nunchuks or Gamecube controllers. The game also lacks Mii support, instead opting for generic characters like “pirate” or “sexy space lady.” Miis are always better than generic avatars.

Overall, “Scene It? Bright Lights! Big Screen!” is a pretty decent party title. I’d recommend it if you are looking for more Wii party games friendly for new gamers, and it will be a lot more palpable once it’s cheaper than the $40 launch price.

*This review is based on a copy provided by the publisher and played for three rounds, both single player and multiplayer.*