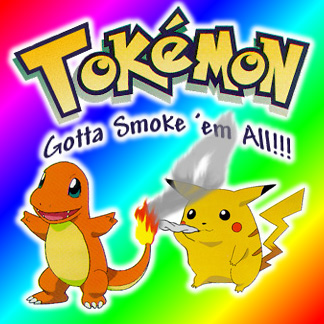 Pokémon Black 2 and White 2 is coming out this Sunday, and even though I’m a 28 year old man with no acknowledged mental illness, I will buy and play the cute, monstery bejeezus out of said game come Sunday.

Like at least a few things I love unabashedly now (South Park, Andrew W.K.), I spent a lot of time thinking Pokémon was literally the dumbest shit in the universe. My little brother was the exact target audience for Pokémon when it first broke as a giant fad, so naturally he ate it up. I razzed him for liking something obviously targeted at him, because I was a middle schooler, which is the worst type of person.

Plus I was convinced they were just ripping off this… I still miss those guys. How about a game where you catch, train, and battle Draculas and Wolfmans?

Because of his Pokelove, my little brother got a GameBoy long before I ever got a handheld system. Eventually, I started to get swept up in his rampant Pokemania. I watched a little bit of the show, and by the end of the episode, it was no longer out of irony. There were even a couple late nights where I snuck into my brother’s room to play through a few furtive, secret Pokebattles. That was it, Pikachu’s tiny, adorable talons sunk into my soul. But I had middle school asshole cred to maintain, and more importantly, no Gameboy of my own. So it would be years before I was going on my own Pokeventures.

And shit, Battlebots wasn’t going to watch itself.

One fateful Christmas, that finally changed. Little bro and I both had Gameboy Advances, and lo and behold, there was Leaf Green for him, and Fire Red for me. And then it was really over. I sunk a crazy amount of hours into that game, and blazed through every main series game after that. Like a normal person, little bro kind of grew away from Pokemadness, but here I am, counting down the days, and plotting the team of weird little monsters I plan to gather come gameday.

Should I pick the Juggalo…

… or the tranny in blackface?

It doesn’t hurt that under the cartoony monster fluff there beats the heart of an insanely deep RPG. The amount of math going on behind the scenes of these games—and the lengths some of the really crazy players go to exploit them— is intense. And while other RPGs have a handful of characters join your party, Pokémon lets you tailor your entire team from a pool of hundreds, all with wildly different skills and abilities.

Thanks to these guys, I can make a team that spells out “PENIS.” Life is beautiful.

Pokémon has outlived its status as an inescapable pop cultural phenomenon, but to me it still feels like one of Nintendo’s “newest” franchises. Not just because I discovered it late, but because we didn’t get it in the US until 1998. Even as one of Nintendo’s “youngest” series, it’s already settled into a formula. Each new game in the series doesn’t do anything to drastically change the formula, but rather tweaks it and streamlines it. Judging by the reviews, Black 2 and White 2 is a perfect example of this philosophy. Lots of little changes that make the experience better, but don’t change the fundamentals.

This Pokémon is a pair of ghost nards. Nintendo will never change this.

This isn’t a bad thing. Even without making huge changes to the series, the games have yet to feel “phoned in.” There are always new places to discover and new creatures to tame, train, or knock the fuck out. If anything the things that never change have become charming, maybe even comforting. Talking to a wise old mentor that the game claims you’ve known for years, and then having him turn around and ask whether you’re a boy or a girl is a weird bit of anti-immersion that still gets a chuckle out of me. A new Pokémon game is like rewatching a favorite movie or rereading a favorite book… except once you get halfway through act 1, all the details are different. A new adventure with old friends.